Think Like a Feminist: The Philosophy Behind the Revolution (Paperback) 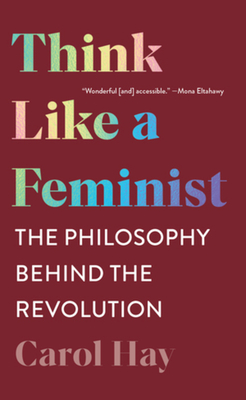 Think Like a Feminist: The Philosophy Behind the Revolution (Paperback)

An audacious and accessible guide to feminist philosophy—its origins, its key ideas, and its latest directions.

Think Like a Feminist is an irreverent yet rigorous primer that unpacks over two hundred years of feminist thought. In a time when the word feminism triggers all sorts of responses, many of them conflicting and misinformed, Professor Carol Hay provides this balanced, clarifying, and inspiring examination of what it truly means to be a feminist today. She takes the reader from conceptual questions of sex, gender, intersectionality, and oppression to the practicalities of talking to children, navigating consent, and fighting for adequate space on public transit, without deviating from her clear, accessible, conversational tone. Think Like a Feminist is equally a feminist starter kit and an advanced refresher course, connecting longstanding controversies to today’s headlines.

Think Like a Feminist takes on many of the essential questions that feminism has risen up to answer: Is it nature or nurture that’s responsible for our gender roles and identities? How is sexism connected to racism, classism, homophobia, transphobia, and other forms of oppression? Who counts as a woman, and who gets to decide? Why have men gotten away with rape and other forms of sexual violence for so long? What responsibility do women themselves bear for maintaining sexism? What, if anything, can we do to make society respond to women’s needs and desires?

Ferocious, insightful, practical, and unapologetically opinionated, Think Like a Feminist is the perfect book for anyone who wants to understand the continuing effects of misogyny in society. By exploring the philosophy underlying the feminist movement, Carol Hay brings today’s feminism into focus, so we can deliberately shape the feminist future.

Carol Hay is an associate professor of philosophy at University of Massachusetts Lowell and author of the award-winning Kantianism, Liberalism, and Feminism: Resisting Oppression. She’s written for the New York Times, the Boston Globe, and Aeon magazine. She lives near Boston, MA.
With a winning mix of scholarship and irreverence, the author lays out the philosophical underpinnings of feminism and how they have evolved…A lively compendium.
— Kirkus Reviews

The best feminist work leaves you changed, unable to look at the world in the same way. Think Like a Feminist does this. Carol Hay provides historical perspective, political awareness, and philosophical insight to cut through confusions about feminism, giving us the tools of analysis and skills of engagement needed to build a more just world.

At once welcoming and inclusive, yet uncompromisingly political, Carol Hay recognizes the wide variety of feminist voices while speaking boldly in a voice of her own.
— Quill R. Kukla, professor of philosophy, Georgetown University

Think Like a Feminist has opened my eyes in ways I had not known they were closed. It is a timely and deeply important book, and I cannot recommend it highly enough, especially for those who yearn for justice for all human beings, no matter their sex, gender, or race.

A timely and accessible introduction to feminist thought in the twenty-first century. Highly recommended.
— Ásta, author of Categories We Live By: The Construction of Sex, Gender, Race, and Other Social Categories

Carol Hay is a warm and witty guide through modern-day gender politics, welcoming novices and offering substance to those already with her in the trenches. This is the book to give the questioning young person or the cynical patriarch in your life, but also a good read for your feminist book club or radical action group.
— Alice MacLachlan, editor, Feminist Philosophy Quarterly

With this book, beautifully written and often disarmingly hilarious, we see clearly the luminous future for feminism, and one of its brightest lights will be Carol Hay.
— Clancy Martin, professor of philosophy, University of Missouri–Kansas City

A caffeinated tour through the history of feminist thought…Hay addresses small but useful steps we can take to go beyond the realm of ideas and achieve real-world results.
— Doug Sparks, Merrimack Valley Magazine