Medieval Bodies: Life and Death in the Middle Ages (Hardcover) 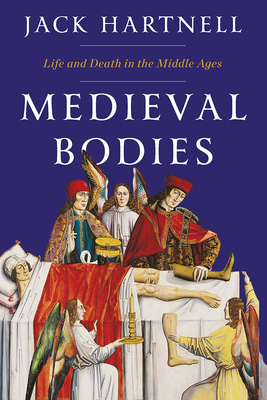 Medieval Bodies: Life and Death in the Middle Ages (Hardcover)

With wit, wisdom, and a sharp scalpel, Jack Hartnell dissects the medieval body and offers a remedy to our preconceptions.

Just like us, medieval men and women worried about growing old, got blisters and indigestion, fell in love, and had children. And yet their lives were full of miraculous and richly metaphorical experiences radically different from our own, unfolding in a world where deadly wounds might be healed overnight by divine intervention, or where the heart of a king, plucked from his corpse, could be held aloft as a powerful symbol of political rule.

In this richly illustrated and unusual history, Jack Hartnell uncovers the fascinating ways in which people thought about, explored, and experienced their physical selves in the Middle Ages, from Constantinople to Cairo and Canterbury. Unfolding like a medieval pageant, and filled with saints, soldiers, caliphs, queens, monks and monstrous beasts, this book throws light on the medieval body from head to toe—revealing the surprisingly sophisticated medical knowledge of the time.

Bringing together medicine, art, music, politics, philosophy, religion, and social history, Hartnell's work is an excellent guide to what life was really like for the men and women who lived and died in the Middle Ages. Perfumed and decorated with gold, fetishized or tortured, powerful even beyond death, these medieval bodies are not passive and buried away; they can still teach us what it means to be human.

Jack Hartnell is a lecturer in art history at the University of East Anglia, Norwich. He has previously held positions at Columbia University, the Courtauld Institute, the Max Planck Institute in Berlin, and the Victoria & Albert Museum in London.
A thick, spicy plum pudding of a book.
— Barbara Newman - London Review of Books

Jack Hartnell tells [an] extraordinary story in his wonderfully rich study of the Middle Ages…His idea of approaching the medieval worldview through the body is inspired…This beautifully illustrated book succeeds brilliantly in bringing this much maligned period to life…A triumph of scholarship.
— PD Smith - Guardian

A dazzling tour through physiognomy and across time, medieval bodies are a route into understanding a richly imaginative and curious age…[C]apacious and entertaining…[M]arvellously detailed…Medieval Bodies lets its readers see through medieval eyes. Guided by Hartnell’s expertise, we gaze upon a long-ago world.

One of the achievements of this splendid book is to make our world view seem more narrow and fragmented than that of the extensive period we place somewhere between the Dark Ages and the Renaissance…[A]t every point you’ll encounter wit, learning and riveting stories. A wonderful read.
— Melanie McDonagh - Evening Standard

[Medieval Bodies will] make you smile and squirm in equal measure…This is a book about the body, but in some ways it is an exploration of the recesses of the medieval mind