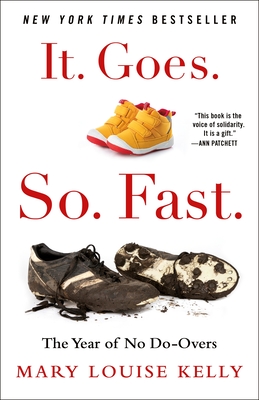 Operating Instructions meets Glennon Doyle in this new book by famed NPR reporter Mary Louise Kelly that is destined to become a classic—about the year before her son goes to college—and the joys, losses and surprises that happen along the way.

The time for do-overs is over.

Ever since she became a parent, Mary Louise Kelly has said “next year.” Next year will be the year she makes it to her son James’s soccer games (which are on weekdays at 4 p.m., right when she is on the air on NPR’s All Things Considered, talking to millions of listeners). Drive carpool for her son Alexander? Not if she wants to do that story about Ukraine and interview the secretary of state. Like millions of parents who wrestle with raising children while pursuing a career, she has never been cavalier about these decisions. The bargain she has always made with herself is this: this time I’ll get on the plane, and next year I’ll find a way to be there for the mom stuff.

Well, James and Alexander are now seventeen and fifteen, and a realization has overtaken Mary Louise: her older son will be leaving soon for college. There used to be years to make good on her promises; now, there are months, weeks, minutes. And with the devastating death of her beloved father, Mary Louise is facing act three of her life head-on.

Mary Louise is coming to grips with the reality every parent faces. Childhood has a definite expiration date. You have only so many years with your kids before they leave your house to build their own lives. It’s what every parent is supposed to want, what they raise their children to do. But it is bittersweet. Mary Louise is also dealing with the realities of having aging parents. This pivotal time brings with it the enormous questions of what you did right and what you did wrong.

This chronicle of her eldest child’s final year at home, of losing her father, as well as other curve balls thrown at her, is not a definitive answer―not for herself and certainly not for any other parent. But her questions, her issues, will resonate with every parent. And, yes, especially with mothers, who are judged more harshly by society and, more important, judge themselves more harshly. What would she do if she had to decide all over again?

Mary Louise’s thoughts as she faces the coming year will speak to anyone who has ever cared about a child or a parent. It. Goes. So. Fast. is honest, funny, poignant, revelatory, and immensely relatable.

Mary Louise Kelly has been reporting for NPR for nearly two decades and is now cohost of All Things Considered. She has also written suspense novels, Anonymous Sources and The Bullet, and is the author of articles and essays that have appeared in the New York Times, the Atlantic, the Washington Post, and the Wall Street Journal, among numerous other publications.

A Georgia native, Kelly graduated from Harvard University with degrees in government and French language and literature and completed a master’s degree in European studies at the University of Cambridge in England. She created and taught a graduate course on national security and journalism at Georgetown University. In addition to her NPR work, Kelly has served as a contributing editor at the Atlantic, moderating news-maker interviews at forums from Aspen to Abu Dhabi.

"It. Goes. So. Fast. is a moving and funny account of the deals we cut with ourselves: what we sacrifice, what we gain, and what we really want (which is everything). By holding up a mirror to her own choices, Mary Louise Kelly gives us tremendous insight into how we struggle to be true to ourselves and the people we love, and how we're never going to get it exactly right. This book is the voice of solidarity. It is a gift."
—Ann Patchett

"This compelling account of the divided heart of a dedicated journalist and devoted mother is tender and gritty and remarkably relevant."
—Hilma Wolitzer, Author of Today a Woman Went Mad in the Supermarket

“Mary Louise Kelly has written an achingly honest memoir that reflects the joys, regrets, pitfalls and triumphs of the modern working mother. Humor, heart, and humanity bounce off every. single. page. I felt like I was having a bottle (or two) of wine with a close friend whose balancing act very much resonated with mine—and probably yours too.”
—Katie Couric

"A book for everyone who has to get through the sweet agony of raising children and letting them go. Kelly describes the interior shifts of this and other milestones with candor, vulnerability and wry humor. "
—Katty Kay, BBC Correspondent and New York Times bestselling author of The Confidence Code