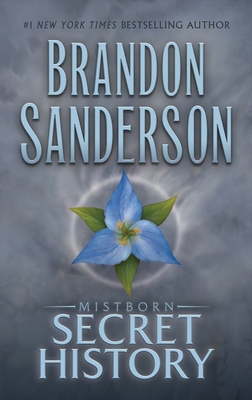 Kelsier, sentenced to die mining the Pits of Hathsin after attempting to rob the Lord Ruler’s palace, arose as a powerful Mistborn and inspired the revolution that shook the foundations of the Final Empire. His name and deeds passed into legend.

But was that truly the end of his tale? Whispered hints to those he called friends suggested there was a lot more going on. If you think you know the story of the Mistborn trilogy, think again—but to say anything more here risks revealing too much. Even knowing of this tale’s existence could be heresy.

Other Tor books by Brandon Sanderson

The Mistborn trilogy
Mistborn: The Final Empire
The Well of Ascension
The Hero of Ages

Mistborn: The Wax and Wayne series
Alloy of Law
Shadows of Self
Bands of Mourning
The Lost Metal

Other books by Brandon Sanderson

Praise for the Mistborn series and Brandon Sanderson

Mistborn
“A breathtaking saga that promises twists every step of the way… succeeds in celebrating what makes fantasy magical while simultaneously delivering a fresh adventure that’s endlessly entertaining.” —Paste Magazine, “The 50 Best Fantasy Books of the 21st Century (So Far)”

The Hero of Ages
“Sanderson is an evil genius. There is simply no other way to describe what he's managed to pull off in this transcendent final volume of his Mistborn trilogy.” —RT Book Reviews

“A fresh view of how a world can grow, building new dimensions into the best of the old. Sanderson continues to show that he is one of the best authors in the genre.” —Library Journal, starred review

“An engaging and fun romp of a read. The characters really shine in this book.”—RT Book Reviews

Shadows of Self
“Delivers more excitement, adventure, and magic in a newly industrialized world that is as richly realized as any of Sanderson’s creations.” —Buzzfeed

The Bands of Mourning
“Witty, memorable characters; a fast-moving, plate-spinning plot; and a deepening of one of the most creative magic systems ever conceived: it’s everything a Sanderson fan could ask for.” —B&N Sci-Fi and Fantasy Blog