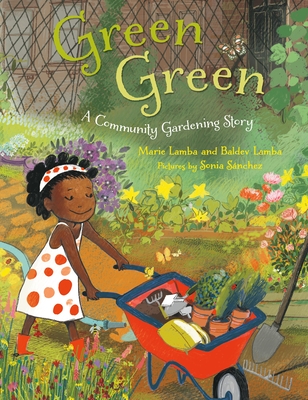 Green grass is wide and fresh and clean for a family to play in, and brown dirt is perfect for digging a garden. But when gray buildings start to rise up and a whole city builds, can there be any room for green space? The neighborhood children think so, and they inspire the community to join together and build a garden for everyone to share in the middle of the city.

Marie Lamba is author of the contemporary young adult novel What I Meant… (Random House), which Publisher’s Weekly called “an impressive debut.” She is also author of the contemporary YA novel Over My Head and of the paranormal YA Drawn. Marie’s work appears in the short story anthology Liar Liar (Mendacity Press and Blackstone Audio), the anthology Call Me Okaasan: Adventures in Multicultural Mothering (Wyatt-MacKenzie Publishing), and her articles are in more than 100 publications including national magazines such as Writer’s Digest, Garden Design and RWR. She has worked as an editor, an award-winning public relations writer, and a book publicist, has taught classes on novel writing and on author promotion, and belongs to The Liars Club. Marie is also an Associate Literary Agent at The Jennifer De Chiara Literary Agency. She lives in Doylestown, Pennsylvania.

Baldev Lamba, coauthor of Green Green, is Associate Professor of Landscape Architecture at Temple University and an award-winning landscape architect who is one of the designers of The First Ladies Water Garden on the National Mall in Washington, DC. His articles have appeared in numerous publications including Landscape Architecture Magazine, Garden Design Magazine and Hort Technology. A long-time advocate of sustainability, Baldev has presented this topic at conferences around the world. As principal of the landscape architecture firm Lamba Associates, Inc. he has worked with numerous inner city groups to create community gardens and urban parks, always with an eye toward sustainability. Among Baldev’s recent projects was the PHS Pops Up Garden, which transformed a barren city block in Philadelphia into a lush urban oasis.

Sonia Sanchez is the illustrator of several books for children, including Here I Am, an Eisner award winner for illustration. Sonia lives in Barcelona, Spain.
"An attractive read-aloud for beginning lessons on gardening." —Chelsea Couillard-Smith, School Library Journal