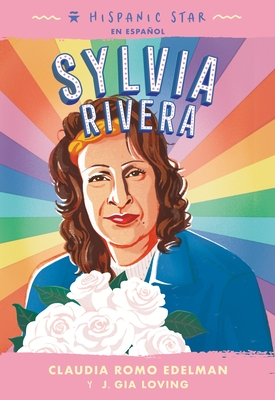 Read about Sylvia Rivera, who is among the most groundbreaking, iconic Hispanic and Latinx heroes who have shaped our culture and the world in Hispanic Star: Sylvia Rivera, co-written with J. Gia Loving, from Claudia Romo Edelman's gripping Hispanic Star biography series for young readers.

Meet Stonewall uprising veteran Sylvia Rivera—once just a kid from New York City. A transgender Latina, Sylvia became an influential gay liberation and transgender rights activist who fought especially for transgender people of color. In the 1970s, Sylvia and Marsha P. Johnson founded the Street Transvestite Action Revolutionaries (STAR), a group devoted to providing services and advocacy for homeless LGBTQ+ people. Nearly two decades after her passing, Sylvia and her legacy continue to have an impact on the LGBTQ+ rights movement and remain an inspiration for marginalized queer people everywhere.

Hispanic Star proudly celebrates Hispanic and Latinx heroes who have made remarkable contributions to American culture and have been undeniable forces in shaping its future. If you can see it, you can be it.

Claudia Romo Edelman is the Founder of the We Are All Human Foundation. Claudia has worked for 25 years with internationally recognized institutions including the United Nations, UNICEF, the Global Fund and the World Economic Forum. She has a track record in launching global campaigns, and she’s a master of agenda setting. She has been in the driver’s seat of some of the most successful global campaigns in the last decade including: the launch of the SDG’s, Product (RED), the creation of the SDG Lions and rebranding of the UN Refugee Agency.