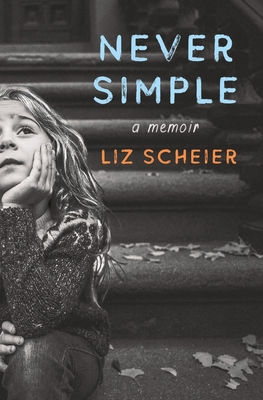 “Liz Scheier does for memoir what her mother Judith did for dysfunction: excels. As young Liz struggles with her mother’s aggressive behavior, she sees that things are not as they should be, and life’s never simple. A beautiful tragedy.”
— Kayleen Rohrer, InkLink Books, East Troy, WI

This gripping and darkly funny memoir “is a testament to the undeniable, indestructible love between a mother and a daughter” (Isaac Mizrahi).

Liz Scheier’s mother was a news junkie, a hilarious storyteller, a fast-talking charmer you couldn’t look away from, a single mother whose devotion crossed the line into obsession, and—when in the grips of the mental illness that plagued her—a masterful liar. On an otherwise uneventful afternoon when Scheier was eighteen, her mother sauntered into the room and dropped two bombshells. First, that she had been married for most of the previous two decades to a man Liz had never heard of and, second, that the man she had claimed was Liz’s dead father was entirely fictional. She’d made him up—his name, the stories, everything.

Those big lies were the start, but not the end; it had taken dozens of smaller lies to support them, and by the time she was done she had built a fairy-tale, half-true life for the two of them. Judith Scheier’s charm was more than matched by her eccentricity, and Liz had always known there was something wrong in their home. After all, other mothers didn’t raise a child single-handedly with no visible source of income, or hide their children behind fake Social Security numbers, or host giant parties in a one-bedroom Manhattan apartment only to throw raging tantrums when the door closed behind the guests.

Now, decades later, armed with clues to her father’s identity—and as her mother’s worsening dementia reveals truths she never intended to share—Liz attempts to uncover the real answers to the mysteries underpinning her childhood. Trying to construct a “normal” life out of decidedly abnormal roots, she navigates her own circuitous path to adulthood: a bizarre breakup, an unexpected romance, and the birth of her son and daughter. Along the way, Liz wrestles with questions of what we owe our parents even when they fail us, and of how to share her mother’s hilarity, limitless love, and creativity with children—without passing down the trauma of her mental illness. Never Simple is the story of enduring the legacy of a hard-to-love parent with compassion, humor, and, ultimately, self-preservation.

Liz Scheier is a former Penguin Random House editor who worked in publishing and content development for many years, including at Barnes & Noble.com and Amazon. She writes book reviews and feature articles for Publishers Weekly. She is now a product developer living in Washington, D.C., with her husband, two small children, and an ill-behaved cat. Never Simple is her first book.

“This powerful, conversational and — above all — honest memoir shakes hard truths out of the family tree.”
—The New York Times Book Review

“‘You can still love someone who has caused you a lot of harm,’ Scheier writes. Never Simple helped me understand the truth behind this statement — and the guts it takes to say it… Scheier approaches her childhood like a detective…as she points out the cracks between the fiction she was raised with and the facts she pieced together on her own…By the time I reached the end, I was grateful that Scheier had weathered the storm.”
—The New York Times, Group Text column

“Never Simple shows a child and young adult who, while living in chaos, has a maturity and wisdom that most adults don’t possess. As a result, our response is more profound awe than merely a sympathetic aww… Some [readers] will see themselves while others will empathize. But in the end, Never Simple reminds every reader that no matter who we are and where we come from, life is never simple.”
—USA Today

“An incredible book. I highly recommend Never Simple. It's hilarious, poignant, witty, and brutally honest. I loved it to pieces.”
—Mira Bartók, author of The Memory Palace

“Scheier…debuts with a stunning and generous account of living with her mother’s mental illness…Readers will find it hard to part with this one.”
—Publishers Weekly, *starred*

“[A] jaw-dropping story…that will spark necessary conversation about transparency, mental health, abuse, addiction, housing, parenthood, egg donation, elder care, but also questions about love, sexuality, friendship, obligation, responsibility, devotion, and freedom. While this sounds like one kitchen sink of a book, what Scheier does is reveal the way these issues so often are impossible to untangle from one another.”
—Observer

“[Never Simple] blends dark humor with heartache…[Scheier’s] rich imagery and engaging prose will keep readers turning the pages…A brave exploration of a difficult but forever-connected mother-daughter relationship. Scheier’s memoir will appeal to many, thanks to its wit, unraveling mystery, and honesty.”
—Library Journal

“[In this] tense and heart-rending story…Scheier is sometimes as sardonic as her mother, as well as funny and frequently clever…Never Simple writhes with the sorrow and guilt only a deep and complicated love can arouse.”
—BookPage

“Scheier’s debut is heartbreaking and compelling. The writing is insightful and candid, and the style is crisp and frank, threaded with both an aching sorrow and a droll perspective…Scheier sets her own course here. Never Simple is a worthwhile contribution to the library of stories about dysfunctional families, survival and compassion.”
—Bookreporter

“Sometimes raw and other times wry, Scheier recounts the combinations of adventure and abuse, love and terror her mother, Judith, engendered… Ultimately, Scheier reconciles these two contradictory truths of her mother’s persona. Scheier’s final pages are a moving confession of learning how to love her own children the ‘correct’ amount without subjecting them to the damaging extremes of a mother’s love.”
—Booklist

“[In this] touching memoir…Scheier illustrates how a child can not only heal from trauma, but evolve into forgiveness…[P]oignant, often horrific and darkly funny.”
—Shelf Awareness

“Liz Scheier’s beautiful book is a testament to the undeniable, indestructible love between a mother and a daughter. In telling her story she brings enormous sympathy to an exceedingly complicated relationship, and thus a clearer understanding for all of us with mothers. It’s a meditation on the subject of how much fear and dread can be tolerated by a loving heart. I adored it.”
—Isaac Mizrahi

“The complexities of a mother/daughter relationship are laid bare in this darkly funny, and utterly shattering memoir. Liz Scheier writes with shocking beauty and grace, never once turning her back on the truth. Never Simple is a brilliant, triumphant debut by a writer of significant literary talent.”
—Augusten Burroughs, author of Running With Scissors and Toil & Trouble

“Possibly the most brilliant, evocative, devastating memoir of what it is like to be the daughter of a mother with Borderline Personality Disorder, Liz Scheier’s story is also one of resilience and compassion. The questions it asks are ones that every surviving adult child of a profoundly mentally ill parent grapples with: how strong is the maternal thread that enables the survivor to care for an abusive mother even when they become a danger to their world and everyone in it? Is it possible for those left behind to ever heal? Staggering, at turns horrifying and life-giving, Never Simple left me gasping for breath.”
—Elissa Altman, author of Motherland

“A riveting and poignant memoir of lies, compassion, and discovery. I couldn't put it down.”
—Jenny Lawson, New York Times bestselling author of Broken, Furiously Happy, and Let's Pretend This Never Happened