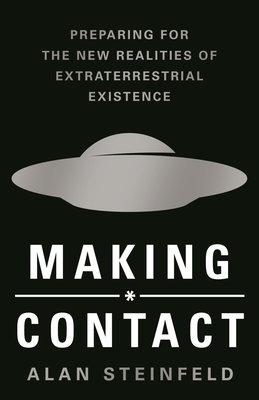 "I feel it is one of the best approaches I have found to grasp the most jarring enigma humanity has ever faced." —George Noory, host of Coast to Coast AM

“We cannot separate the earth from its greater cosmic environment. What is needed is a new story and Alan Steinfeld’s Making Contact is part of that story.” —Deepak Chopra, Author, Total Meditation

How can we prepare for an event that is literally beyond anything humanity has ever faced?

Making Contact presents multiple perspectives on what no longer can be denied: UFOs and their occupants are visiting our world. The book answers questions which remain in the wake of the recent Pentagon’s disclosures as to who and why these beings are here.

The volume contains original writings by the leading experts of the phenomena such as: Linda Moulton Howe, Earthfiles reporter, Whitley Strieber best-selling author of Communion, Professor John E. Mack, former head of the Harvard Medical school of psychiatry and an alien abduction investigator, Darryl Anka internationally known for his communication with the extraterrestrial Bashar, Nick Pope, former UK Ministry of Defense UFO investigator, Grant Cameron expert on American presidents and UFOs, Drs. J.J. and Desiree Hurtak, globalists and founders of the worldwide organization, The Academy for Future Science, Caroline Cory, director of Superhuman and ET: Contact, Mary Rodwell, author of the New Human about star-seed children, Henrietta Weekes, actress and writer, expressing the poetic aspects of making contact. Alan Steinfeld, contributes and curates the collection with 30 years of experience with the subject. The Foreword by George Noory of Coast to Coast AM kicks off the volume with his veteran overview of the need to wake up to the “new realities of extraterrestrial existence.”

At this critical juncture in the government’s official acknowledgement of the reality of UFOs/UAPs, scientists, politicians and mainstream news outlets have no idea what to make of these startling revelations or the outpouring of sightings and “contact” experiences currently being reported on a global scale. The book stands as the most comprehensive clarification to date on the intent and intelligence behind the phenomena. The variety of viewpoints expressed in the volume provide a solid foundation for the “preparation” of the greatest challenge to ever face humankind.

Making Contact stands as the essential handbook for embracing the most exalted moment in history: Meeting the cosmic others.

Alan Steinfeld is an explorer of consciousness. For over 30 years he has hosted and produced the weekly television series New Realities in New York City. Additionally, with 68,000 subscribers to his YouTube channel of the same name, there have been over 20 million viewers who have seen his programs. These include interviews with luminaries in the field of health, spirituality and UFOS - such as Deepak Chopra, Marianne Williamson, Ram Dass and every major UFO researcher in the field. With his media appearances, lectures, and conferences he informs millions about human potential, remote viewing, and the nature of alien contact. For the over five years he has emceed the largest UFO event in the country, Contact in the Desert. He feels that only when the inner explorations of the soul are combined with the outer adventures of the mind can we achieve a harmonious understanding of our place in the cosmos.

“We cannot separate the earth from its greater cosmic environment. What is needed is a new story and Alan Steinfeld’s Making Contact is part of that story.” —Deepak Chopra, Author, Total Meditation

"New Realities are upon us! Alan Steinfeld provides one of the most informed and open-minded overviews of communication with alien intelligence and the UFO/OVNI/UAP phenomenon in his new book, Making Contact."
– Alex Grey & Allyson Grey, Chapel of Sacred Mirrors

"In Making Contact, Alan Steinfeld has presented a fascinating compendium of views on the most important issue in the world today - the presence of extraterrestrial beings engaging the human race and the pending conformation of that presence by world governments. That confirmation, Disclosure, is close at hand, and this volume will help the reader to prepare."—Stephen Bassett, Paradigm Research Group


"This is a serious book. Making Contact needs to be read by skeptics, advocates, and agnostics. Skeptics may not change their minds, but their responses will be a useful test for their belief systems. Advocates will find evidence for their perspective and agnostics will find their worldview challenged. I have known a few of the authors of this anthology and will vouch for their sincerity, and we will see if history confirms their perspective."
—Stanley Krippner, Ph.D.co-author Personal Mythology

"Making Contact is the most comprehensive book I have ever read about the UFO/ET phenomenon! It is a powerful introduction for people discovering this field of interest, and a rich resource for people well-acquainted with the phenomenon. A fascinating read!"
—Barbara Lamb, Contact regression therapist, speaker and author

"In taking on this volume led by Steinfeld — an explorer of consciousness — be prepared for a melding of easy-to-swallow encounters with objects simply scooting through our sky to discourse on belief systems, hybrid Homo sapiens, and corralling your perception of awareness." —Leonard David, space journalist and author of Moon Rush: The New Space Race

"Alan Steinfeld has put together the perfect book for anyone who wants extensive details of extraterrestrial existence. It is an eye opener and mind opener. It will expand your consciousness to new realities and awaken you to the 5th Dimension. Making Contact is a must READ."
—Kimberly Meredith, Medical Intuitive, Author Awakening To The Fifth Dimension

"[A] stimulating collection... . Those curious about the possibilities of extraterrestrial contact should take note."—Publisher's Weekly

“I’ve followed this field for over 3 decades and Making Contact is probably the most provocative and helpful anthology I have seen. From the whistleblower accounts from Howe and the esoterics of Weekes and the Hurtaks, to the interdimensional savvy of Anka and the science of Pope and Mack, the puzzle pieces are laced together by Alan Steinfeld masterfully and summarized in his own personal account.” —Foster Gamble, co-creator of Thrive 1 and 2