Not Your Average Hot Guy: A Novel (Match Made in Hell #1) (Paperback) 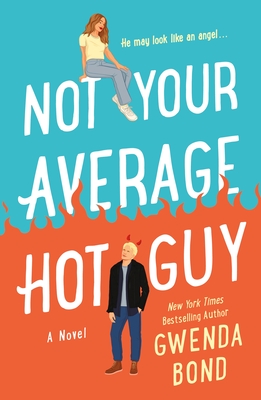 Not Your Average Hot Guy: A Novel (Match Made in Hell #1) (Paperback)

This is book number 1 in the Match Made in Hell series.

A paranormal romantic comedy at the (possible) end of the world.

From New York Times bestselling author Gwenda Bond, Not Your Average Hot Guy is a hilarious romantic comedy about two people falling in love, while the fate of the world rests on their shoulders.

All Callie wanted was a quiet weekend with her best friend. She promised she could handle running her family’s escape room business while her mom is out of town. Instead a Satanic cult shows up, claiming that the prop spell book in one of the rooms is the real deal, and they need it to summon the right hand of the devil. Naturally they take Callie and her friend, Mag, along with them. But when the summoning reveals a handsome demon in a leather jacket named Luke who offers to help Callie stop the cult from destroying the world, her night goes from weird to completely strange.

As the group tries to stay one step ahead of the cult, Callie finds herself drawn to the annoying (and annoyingly handsome) Luke. But what Callie doesn’t know is that Luke is none other than Luke Morningstar, Prince of Hell and son of the Devil himself. Callie never had time for love, and with the apocalypse coming closer, is there room for romance when all hell’s about to break loose?

Gwenda Bond is the New York Times bestselling author of many novels, including the Lois Lane and Cirque American trilogies. She wrote the first official Stranger Things novel, Suspicious Minds. She also created Dead Air, a serialized mystery and scripted podcast written with Carrie Ryan and Rachel Caine. Not Your Average Hot Guy is her first romantic comedy for adults.

Her nonfiction writing has appeared in Publishers Weekly, Locus Magazine, Salon, the Los Angeles Times, and many other publications. She has an MFA in writing from the Vermont College of Fine Arts. She lives in a hundred-year-old house in Lexington, Kentucky, with her husband and their unruly pets. She believes she may have escaped from a 1940s screwball comedy. She writes a monthlyish letter you can sign up for at her website, and you can also follow her on Twitter.

Featured on Buzzfeed, SweetyHigh, The Nerd Daily, and more!

"Delightful mythological elements and laugh-out-loud humor make this a light-hearted, feel-good paranormal romcom. Mature teens will enjoy the Hell mythology, adventure, and humor as well as the twentysomething characters who are still trying to live up to parental expectations." - Booklist

“Bestselling YA author Bond makes her adult debut with an entertaining paranormal rom-com and duology launch. The result is fun, light, and funny.” —Publishers Weekly

"Fun, funny, hot, and heartfelt: Not Your Average Hot Guy is The Good Place but 20% nerdier and 200% sexier. The apocalyptic beach read that everyone needs." - Alix E. Harrow, Hugo Award-winning author

"I never knew the Apocalypse could be so much fun! I absolutely loved spending time with these characters, and in this world. Even if it is almost ending." - Kat Howard, author of the Alex Award-winning An Unkindness of Magicians