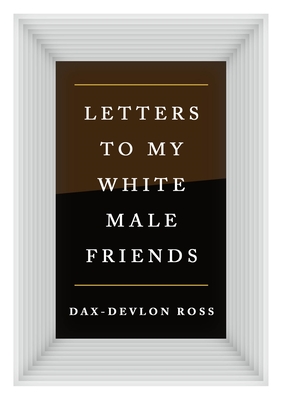 In Letters to My White Male Friends, Dax-Devlon Ross speaks directly to the millions of middle-aged white men who are suddenly awakening to race and racism.

White men are finally realizing that simply not being racist isn’t enough to end racism. These men want deeper insight not only into how racism has harmed Black people, but, for the first time, into how it has harmed them. They are beginning to see that racism warps us all. Letters to My White Male Friends promises to help men who have said they are committed to change and to develop the capacity to see, feel and sustain that commitment so they can help secure racial justice for us all.

Ross helps readers understand what it meant to be America’s first generation raised after the civil rights era. He explains how we were all educated with colorblind narratives and symbols that typically, albeit implicitly, privileged whiteness and denigrated Blackness. He provides the context and color of his own experiences in white schools so that white men can revisit moments in their lives where racism was in the room even when they didn’t see it enter. Ross shows how learning to see the harm that racism did to him, and forgiving himself, gave him the empathy to see the harm it does to white people as well.

Ultimately, Ross offers white men direction so that they can take just action in their workplace, community, family, and, most importantly, in themselves, especially in the future when race is no longer in the spotlight.

DAX-DEVLON ROSS is the author of several books (including The Nightmare and the Dream and Make Me Believe) and his journalism has been featured in Time, The Guardian, The New York Times, Virginia Quarterly Review, The Washington Post Magazine, and other national publications. He won the National Association of Black Journalists’ Investigative Reporting Award for his coverage of jury exclusion in North Carolina courts and is currently a reporting fellow at Type Media Center.

A New York City teaching fellow turned nonprofit executive, Dax is now a principal at the social-impact consultancies Dax-Dev and Third Settlements, both of which focus on designing disruptive strategies to generate equity in workplaces and education spaces alike.

Dax received his Juris Doctor from George Washington University. He currently resides in Washington, D.C., with his wife, Alana, and their young daughter, Ella.

"Letters To My White Male Friends is an urgent appeal to confront systemic racism. Dax-Devlon Ross combines deeply personal experiences with our country’s painful history to call upon us all to work towards real justice. This book forces us to question what we think we know about inequality - and challenges us to act."
--Sheryl Sandberg, COO of Facebook and founder of Lean In and Option B

"A compelling blend of memoir and call to action, Dax-Devlon Ross invites readers to reflect on their own racial socialization as he reflects on his and challenges them not to turn away from the reality of systemic racism but to listen, learn and take action for meaningful social change in their spheres of influence. Not one of those “White Male Friends”? Read it anyway. You’ll be glad you did."--Beverly Daniel Tatum, Ph.D., author of Why Are All the Black Kids Sitting Together in the Cafeteria? and Other Conversations About Race

“In this deeply intimate and often searing account, Ross upends the narrative well intentioned White people often tell themselves about the Black experience. It’s a must read coming-of-age story for our times."--Elsa Walsh, journalist and bestselling author of Divided Lives

"A sweeping deep dive into decades of American social history and politics that is at once personal, compelling, and damning. A fiery, eloquent call to action for White men who want to be on the right side of history.”--Kirkus Reviews (starred)

"[An] astute and accessible account.Ross folds analyses of Supreme Court rulings, gentrification, the “war on drugs,” and income disparities into his candid personal reflections, and offers a useful framework for how white men, in particular, can “shift culture and advance equity” by paying attention to how they receive feedback and by drawing on their own feelings of powerlessness to empathize with marginalized groups. This commonsense guide tackles a pressing social issue head-on."--Publishers Weekly

"I thought I knew about the racial injustice that exists in this country, but this book blew my preconceived notions and truly opened my eyes. To live in America today this book should be required reading."--Fisher Stevens, director, actor, producer, and activist

"Dax-Devlon Ross manages to tackle the extraordinarily difficult issues of race with kindness, compassion and cogency. His story is profoundly personal and deeply compelling. This is required reading for anyone who is prepared to face these sensitive issues with openness and honesty. I loved this book.”--Jon Bernthal, actor and director