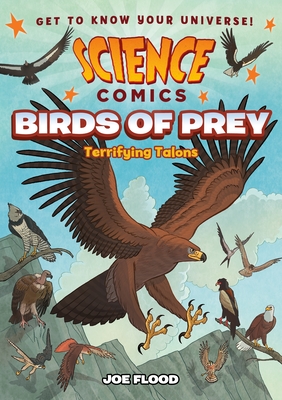 Every volume of Science Comics offers a complete introduction to a particular topic—dinosaurs, the solar system, volcanoes, bats, robots, and more. Whether you're a fourth grader doing a natural science unit at school or a thirty-year-old with a secret passion for airplanes, these graphic novels are for you!

In this volume, you'll get up-close and personal with some of the world’s most skilled hunters, from the majestic eagle to the oft-maligned scavenger vulture! Armed with razor-sharp claws, keen eyesight, powerful wings, and killer instincts, these stealthy predators can make a meal of rodents, fish, snakes, lizards, monkeys, and even kangaroos! Discover how these amazing birds who are often at the top of the food chain, play an integral role in many different ecosystems around the world.

Joe Flood is a comic book author and illustrator whose work includes Cellies, Pirates of the Caribbean and Orcs: Forged for War. For the Science Comics series, he collaborated on Dinosaurs: Fossils and Feathers with MK Reed and wrote and illustrated Sharks: Nature’s Perfect Hunter. He lives with his wife and daughter in New York’s Hudson Valley.

"A fun, fact-filled romp through the world of raptors."—Kirkus