New Spring: Prequel to the Wheel of Time (Mass Market) 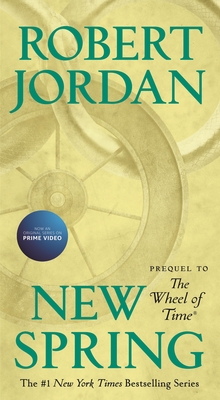 New Spring: Prequel to the Wheel of Time (Mass Market)

This is book number 15 in the Wheel of Time series.

Since its debut in 1990, The Wheel of Time® by Robert Jordan has captivated millions of readers around the globe with its scope, originality, and compelling characters.

The Wheel of Time turns and Ages come and go, leaving memories that become legend. Legend fades to myth, and even myth is long forgotten when the Age that gave it birth returns again. In the Third Age, an Age of Prophecy, the World and Time themselves hang in the balance. What was, what will be, and what is, may yet fall under the Shadow.

For three days battle has raged in the snow around the great city of Tar Valon. In the city, a Foretelling of the future is uttered. On the slopes of Dragonmount, the immense mountain that looms over the city, is born an infant prophesied to change the world. That child must be found before the forces of the Shadow have an opportunity to kill him.

Moiraine Damodred, a young Accepted soon to be raised to Aes Sedai, and Lan Mandragoran, a soldier fighting in the battle, are set on paths that will bind their lives together. But those paths are filled with complications and dangers, for Moiraine, of the Royal House of Cairhien, whose king has just died, and Lan, considered the uncrowned king of a nation long dead, find their lives threatened by the plots of those seeking power.

New Spring begins Moiraine and Lan's quest to find the Dragon Reborn that will lead to the events of The Eye of the World...and their fateful meeting with Rand al'Thor. New Spring is a perfect jumping-on point for fantasy readers wanting to know more about The Wheel of Time.

“Anyone who’s writing epic of secondary world fantasy knows Robert Jordan isn’t just a part of the landscape, he’s a monolith within the landscape.” —Patrick Rothfuss, internationally bestselling author of the Kingkiller Chronicle

“The Eye of the World was a turning point in my life. I read, I enjoyed. (Then continued on to write my larger fantasy novels.)” —Robin Hobb, New York Times bestselling author of the Farseer Trilogy

“Robert Jordan’s work has been a formative influence and an inspiration for a generation of fantasy writers.” —Brent Weeks, New York Times bestselling author of The Way of Shadows


“Jordan has come to dominate the world Tolkien began to reveal.” —The New York Times

“Robert Jordan was a giant of fiction whose words helped a whole generation of fantasy writers, including myself, find our true voices. I thanked him then, but I didn’t thank him enough.” —Peter V. Brett, internationally bestselling author of The Demon Cycle

“[Robert Jordan’s] impact on the place of fantasy in the culture is colossal... He brought innumerable readers to fantasy. He became the New York Times bestseller list face of fantasy.” —Guy Gavriel Kay, internationally bestselling author of Tigana

“Jordan's eagerly awaited prequel to The Wheel of Time more than lives up to its high expectations. Written with all the skill that has made Jordan one of the grand masters of fantasy, it's accessible enough for new readers, while the inside information is sure to captivate longtime fans.” —Publishers Weekly (starred review)

“This is The Wheel of Time at its best: political intrigue, powerful characters, dangerous magic, and even more dangerous secrets.” —Bookpage

“Jordan is the master of his domain.” —The Post and Courier, Charleston, SC