A Memory of Light: Book Fourteen of The Wheel of Time (Mass Market) 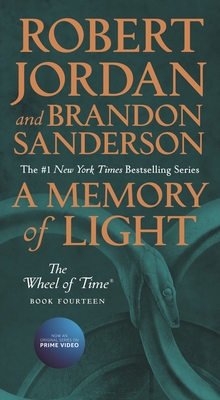 A Memory of Light: Book Fourteen of The Wheel of Time (Mass Market)

This is book number 14 in the Wheel of Time series.

In A Memory of Light, the fourteenth and concluding novel in Jordan’s #1 New York Times bestselling epic fantasy series, the armies of Light gather to fight in Tarmon Gai’don, the Last Battle, to save the Westland nations from the shadow forces of the Dark One.

Rand al’Thor, the Dragon Reborn, is ready to fulfill his destiny. To defeat the enemy that threatens them all, he must convince his reluctant allies that his plan—as foolhardy and dangerous as it appears—is their only chance to stop the Dark One’s ascension and secure a lasting peace. But if Rand’s course of action fails, the world will be engulfed in shadow.

Across the land, Mat, Perrin, and Egwene engage in battle with Shadowspawn, Trollocs, Darkfriends, and other creatures of the Blight. Sacrifices are made, lives are lost, but victory is unassured. For when Rand confronts the Dark One in Shayol Ghul, he is bombarded with conflicting visions of the future that reveal there is more at stake for humanity than winning the war.