The Gathering Storm: Book Twelve of the Wheel of Time (Mass Market) 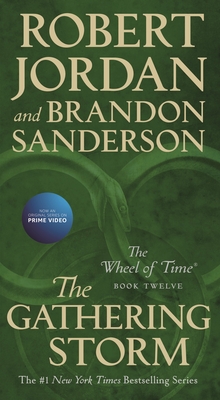 The Gathering Storm: Book Twelve of the Wheel of Time (Mass Market)

This is book number 12 in the Wheel of Time series.

The Gathering Storm, the twelfth novel in Jordan’s #1 New York Times bestselling epic fantasy series, begins the story’s dramatic conclusion as Rand al'Thor, the Dragon Reborn, struggles to unite a fractured network of kingdoms and alliances in preparation for the Last Battle.

War is coming. The Dark One’s forces are brutal and unrelenting. Rand must forge a united front, but the Seanchan remain an immediate threat, as do the Forsaken. With so many shadows swirling around him, Rand is consumed by his responsibilities, turning heartless in the eyes of his allies, and even more merciless to his enemies.

Meanwhile the Seanchan march on the White Tower, where Egwene al'Vere works to rally the disparate factions of the Aes Sedai together, even as their tyrannical leader schemes against her. Providing leadership in the face of increasing uncertainty and despair, Egwene’s fight will prove the mettle of the Aes Sedai, and her conflict will decide the future of the White Tower—and possibly the world itself.

“The battle scenes have the breathless urgency of firsthand experience, and the . . . evil laced into the forces of good, the dangers latent in any promised salvation, the sense of the unavoidable onslaught of unpredictable events bear the marks of American national experience during the last three decades.” —The New York Times on The Wheel of Time

“The Wheel of Time . . . is a fantasy tale seldom equaled and still less often surpassed in English.” —Chicago Sun-Times

“Jordan has a powerful vision of good and evil--but what strikes me as most pleasurable . . . is all the fascinating people moving through a rich and interesting world.” —Orson Scott Card on The Wheel of Time