Crossroads of Twilight: Book Ten of 'The Wheel of Time' (Mass Market) 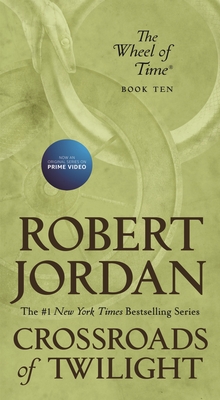 Crossroads of Twilight: Book Ten of 'The Wheel of Time' (Mass Market)

This is book number 10 in the Wheel of Time series.

In Crossroads of Twilight, the tenth novel in Robert Jordan’s #1 New York Times bestselling epic fantasy series, The Wheel of Time®, Rand al'Thor and his allies endure trials by fire amidst battles, sacrifices, and treachery.

Fleeing from Ebou Dar with the kidnapped Daughter of the Nine Moons, whom he is fated to marry, Mat Cauthon learns that he can neither keep her nor let her go, not in safety for either of them, for both the Shadow and the might of the Seanchan Empire are in deadly pursuit.

Perrin Aybara will stop at nothing to free his wife Faile from the Shaido Aiel. Consumed by rage, he offers no mercy to those he takes prisoner. And when he discovers that Masema Dagar, the Prophet of the Dragon, has been conspiring with the Seanchan, Perrin considers making an unholy alliance.

Rand al'Thor, the Dragon Reborn himself, has cleansed the Dark One's taint from the male half of the True Source, and everything has changed. Yet nothing has, for only men who can channel believe that saidin is clean again, and a man who can channel is still hated and feared—even one prophesied to save the world. Now, Rand must gamble again, with himself at stake, and he cannot be sure which of his allies are really enemies.

“Anyone who’s writing epic or secondary world fantasy knows Robert Jordan isn’t just a part of the landscape, he’s a monolith within the landscape.” —Patrick Rothfuss, author of the Kingkiller Chronicle series