The Made-Up Man: A Novel (Paperback) 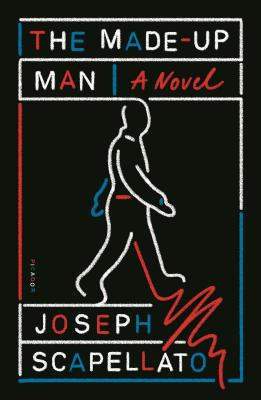 The Made-Up Man: A Novel (Paperback)

"Scapellato's blend of existential noir, absurdist humor, literary fiction, and surreal exploration of performance art merges into something special. . . . The Made-Up Man is a rare novel that is simultaneously smart and entertaining." —Gabino Iglesias, NPR

Stanley had known it was a mistake to accept his uncle Lech’s offer to apartment-sit in Prague—he’d known it was one of Lech’s proposals, a thinly veiled setup for some invasive, potentially dangerous performance art project. But whatever Lech had planned for Stanley, it would get him to Prague and maybe offer a chance to make things right with T after his failed attempt to propose.

Stanley can take it. He can ignore their hijinks, resist being drafted into their evolving, darkening script. As the operation unfolds it becomes clear there’s more to this performance than he expected; they know more about Stanley’s state of mind than he knows himself. He may be able to step over chalk outlines in the hallway, may be able to turn away from the women acting as his mother or the men performing as his father, but when a man made up to look like Stanley begins to play out his most devastating memory, he won’t be able to stand outside this imitation of his life any longer.

Immediately and wholly immersive, Joseph Scapellato’s debut novel, The Made-Up Man, is a hilarious examination of art’s role in self-knowledge, a sinister send-up of self-deception, and a big-hearted investigation into the cast of characters necessary to help us finally meet ourselves.

Joseph Scapellato’s debut story collection, Big Lonesome, was published in 2017. He earned his MFA in fiction at New Mexico State University and has been published in Kenyon Review Online, Gulf Coast, Post Road Magazine, PANK, UNSAID, and other literary magazines. His work has been anthologized in Forty Stories, Gigantic Worlds: An Anthology of Science Flash Fiction, and The Best Innovative Writing.

Scapellato is an assistant professor of English in the creative writing program at Bucknell University. He grew up in the suburbs of Chicago and lives in Lewisburg, Pennsylvania, with his wife, daughter, and dog.

He is the author of The Made-Up Man.

“This bold, hilarious, and playfully absurd novel asks the biggest questions out there, but does it with such shrewd grace and charming lightness that you won’t feel the existential weight until it’s already crashed down upon your head. A perfect amalgamation of the tragicomic and the potentially uplifting, Joseph Scapellato’s writing is in the imaginative vein of Jesse Ball and Charlie Kaufman, but with a tenderhearted spirit that is uniquely his own.”
—Alexandra Kleeman, author of You Too Can Have a Body Like Mine

"An experimental and existential noir . . . [The Made-Up Man] keeps its pages turning with absurdist comedy, committed throughout to the idea espoused by Stanley’s late grandmother that whatever else he may be, 'Man is a beast that laughs.'"
—Kathleen Rooney, The Chicago Tribune

"Joseph Scapellato's The Made-Up Man reminds me of a bacon-topped doughnut—a mixture of incongruent elements that somehow work well together. And like that sweet treat, Scapellato's blend of existential noir, absurdist humor, literary fiction, and surreal exploration of performance art merges into something special. . . . The Made-Up Man is a rare novel that is simultaneously smart and entertaining."
—Gabino Iglesias, NPR

"The Made-Up Man is a darkly comic, noir-styled novel powered by an energy that’s equal parts mischief, good humor, and measured cynicism. Based on conventions lifted out of the old detective story playbook, the novel is told from the perspective of a slippery narrator, whose sense of identity expands, collapses, and shatters against a series of nagging moral questions that are less situational than they are existential. The result is an intoxicating alchemy, something genre-blurring and philosophically riveting."
—Kate Watson, Longreads

"A Czech-based film noir of which Kafka himself would be proud."
—Jon Doyle, Review31

"Joseph Scapellato's novel The Made-Up Man is one of the most fun books I have read all year, a smart and absurdist take on noir."
—Largehearted Boy

"This absurdist comedy/noir/coming-of-age novel follows Stanley after he agrees to participate in his Uncle Lech's performance art project in Prague . . . Merging the ludicrous and the melancholic, the odd premise provides many laugh-out-loud moments and some curious insights and enables Stanley to explore and understand why he performs the same role each and every day."
—Alexander Moran, Booklist

“In Joseph Scapellato’s terrifically innovative and existentially rich debut, a young man gets ensnared in a performance art project that soon upends his life—and uncovers some bold new truths along the way. Playful, striking, and wholly original,The Made-Up Man is an engrossing mystery of the self, the rare kind of novel that challenges the way we see the world.” —
Laura van den Berg, author of The Third Hotel

“Joseph Scapellato’s The Made-Up Man is a mystery, a playful essay on performance art, and a meditation on the instability of selfhood. It’s also great fun. Scapellato is the rare author unafraid of intellectualism but just as invested in storytelling. This is a novel like no other you’ll read this year.”
—Kerry Howley, author of Thrown

“To read the The Made-Up Man is to move through a labyrinthine hall of mirrors in which every reflection holds Joseph Scapellato’s hilarity, verve, curiosity, and compassion. Stanley’s unpredictable journey is set within a beautifully off-kilter context (he’s the unwilling and resistant participant in his uncle’s complex piece of performance art), and here Scapellato’s storytelling feels to be an analogue to Escher’s artful tessellations. And, like those drawings, Scapellato relies on an uncanny and mathematical precision as he investigates and illustrates Stan’s fitfully emergent self-recognition. The Made-Up Man is delightfully inventive and dizzyingly original.”
—Alexander Parsons, author of In the Shadows of the Sun

“The Made-Up Man reads banal nightmare like Kafka, and neurotic human chaos like Joy Williams. But this is no derivative novel—Joseph Scapellato writes like no other American writer, full of harnessed energy, compassion, and deeply disquieting dread that somehow combines the best of the European nihilists with the outlandish optimism that American writers do so well.”
—Amber Sparks, author of The Unfinished World

“Joseph Scapellato’s The Made-Up Man is wild and deep and entrancing fun. Having lost T, the woman of his dreams, Stanley doesn’t know who he is, and his life suddenly becomes a Kafkaesque canvas for someone else (his strange performance artist uncle Lech). Scapellato’s kinetic prose leapfrogs us into moments both disturbing and startlingly familiar—there’s ache inside this comedy, and comedy inside this ache. Read it and be punctured with amazement.”
—C. J. Hribal, author of The Company Car

“The Made-Up Man is an amazing book. Its subtle buildup of invention astonished me. Artists are supposed to probe the sociocultural enclosures that imprison us all. They’re supposed to plan escapes, to break out and mark a pathway for the rest of us. Joseph Scapellato is different. This book is proof that his deep, dervish mind has never known captivity.”
—Alfredo Véa, author of Gods Go Begging