Somebody's Gotta Do It: Why Cursing at the News Won't Save the Nation, But Your Name on a Local Ballot Can (Hardcover) 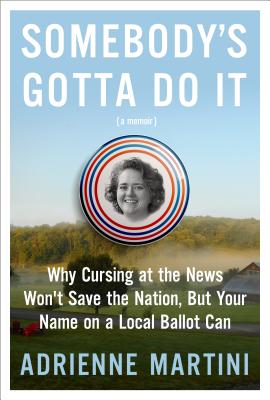 Somebody's Gotta Do It: Why Cursing at the News Won't Save the Nation, But Your Name on a Local Ballot Can (Hardcover)

Somebody's Gotta Do It is a humorous (and instructive) memoir about a progressive woman who runs for very small-town elected office in a red county—and wins (yay!)—and then realizes the critical importance of the job.

Back in the fall of 2016, before casting her vote for Hillary Clinton, Adrienne Martini, a knitter, a runner, a mom, and a resident of rural Otsego County in snowy upstate New York, knew who her Senators were, wasn’t too sure who her Congressman was, and had only vague inklings about who her state reps were. She’s always thought of politicians as . . . oily. Then she spent election night curled in bed, texting her husband, who was at work, unable to stop shaking. And after the presidential inauguration, she reached out to Dave, a friend of a friend, who was involved in the Otsego County Democratic Party. Maybe she could help out with phone calls or fundraising? But Dave’s idea was: she should run for office. Someone had to do it.

And so, in the year that 26,000 women (up from 920 the year before) contacted Emily’s List about running for offices large and small, Adrienne Martini ran for the District 12 seat on the Otsego County Board. And became one of the 14 delegates who collectively serve one rural American county, overseeing a budget of $130 million. Highway repair? Soil and water conservation? Child safety? Want wifi? Need a coroner?

It turns out, local office matters. A lot.

Adrienne Martini is the current representative for District 12 to the Otsego County Board of Representatives. She’s also an award-winning journalist who’s written for Cooking Light and the Washington Post, among other publications, and the author of Hillbilly Gothic and Sweater Quest. When not wearing her county government hat, she works for SUNY Oneonta in the alumni office. She lives in Oneonta, New York, with her husband, two kids, two cats, and two dogs.

"[With] self-deprecating humor, practical advice (such as packing snacks for long committee meetings), and insights into obscure but important issues . . . Martini elevates her story above the minutiae of county board proceedings. The result is a useful guide for those contemplating the plunge into electoral politics."
—Publishers Weekly

“Martini spices up her subject with pithy humor, wry backhands directed at the patriarchy, and (most important) clear advice on how to follow her lead. . . . This is not your standard focus-group-approved politician fare; it's an honest, in-the-moment, firsthand account of a disappointed mother’s foray into local politics. . . . I have yet to read a better summary of public service.”
—The New York Times

“America’s problems are never going to get solved until people learn that the power to change government is in their hands. Somebody’s Gotta Do It is hilarious, necessary, and shows that amazing things can happen when people put themselves on the line and run for office. Everyone should run for office and everyone should read this book.”
—Amanda Litman, cofounder of RUN FOR SOMETHING and author of Run for Something