You Bring the Distant Near (Paperback) 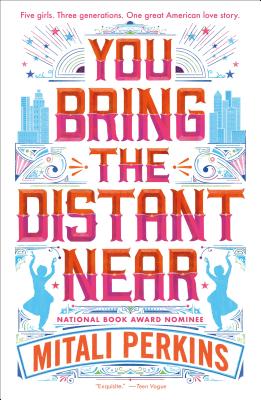 You Bring the Distant Near (Paperback)

This elegant young adult novel captures the immigrant experience for one Indian-American family with humor and heart. Told in alternating teen voices across three generations, You Bring the Distant Near explores sisterhood, first loves, friendship, and the inheritance of culture--for better or worse.

From a grandmother worried that her children are losing their Indian identity to a daughter wrapped up in a forbidden biracial love affair to a granddaughter social-activist fighting to preserve Bengali tigers, award-winning author Mitali Perkins weaves together the threads of a family growing into an American identity.

Here is a sweeping story of five women at once intimately relatable and yet entirely new.

Mitali Perkins has written several books for young readers, including Home Is in Between, Between Us and Abuela, Forward Me Back to You, You Bring the Distant Near (a National Book Award Nominee, a Walter Honor Book, a South Asia Book Award Winner, a Publishers Weekly Best Book of the Year, and a Shelf Awareness 2017 Best Book of the Year), Rickshaw Girl (a NYPL Top 100 Book), and Bamboo People (an ALA Top 10 YA novel). Mitali was born in India and currently resides in Northern California.

"Full of sisterhood, diversity, and complex, strong women, this book will speak to readers as they will undoubtedly find a kindred spirit in at least one of the Das women." —Booklist starred review

"... an unforgettable novel... Perkins’s vibrantly written exploration of a family in transition is saturated with romance, humor, and meaningful reflections on patriotism, blended cultures, and carving one’s own path." —Publishers Weekly starred review

"This stunning book about immigration and cultural assimilation is a must-purchase for teen and new adult collections." —School Library Journal starred review

"...an ambitious narrative that illuminates past and present, departure and reunion, women and family." —The Horn Book starred review

"...features inspiring South Asian girl and women protagonists grappling with love, faith, and culture, as well as the intersections among their personal, communal, and national histories...lushly drawn and emotionally resonant." —Kirkus

"The fully fleshed characters and complex family dynamics provide a vibrant background for exploration of multigenerational adaptation to a diverse America and of the familial and romantic love that nourishes their new roots." —Bulletin of the Center for Children's Books

"With wisdom and wit, You Bring the Distant Near illustrates the beauty in diversity. Perkins's striking imagery and deep, heartfelt insights illuminate the darkest corners of ignorance, providing a bright path to understanding and embracing differences in all their many splendors." —Shelf Awareness starred review