The Hilarious World of Depression (Paperback) 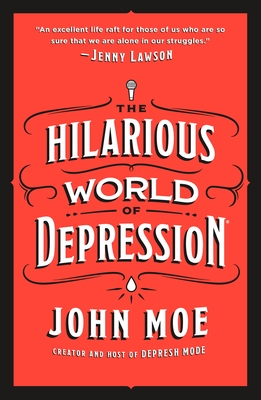 The Hilarious World of Depression (Paperback)

“This book made me laugh and cry immediately after I started reading. John Moe took a hard topic and made it so much easier — taking the world of mental health and illness and making it easy to understand and connect with. It’s a great read, and everyone should have the pleasure of reading it.”
— Kaylyn Schafer, Wordsmith Bookshoppe, Galesburg, IL

"[A] path to deeper understanding and openness, by way of laughter in the dark" —The New York Times Book Review

The Hilarious World of Depression illuminates depression in an entirely fresh and inspiring way.

For years John Moe, critically-acclaimed public radio personality and host of the Depresh Mode with John Moe podcast, struggled with depression; it plagued his family and claimed the life of his brother in 2007. As Moe came to terms with his own illness, he began to see similar patterns of behavior and coping mechanisms surfacing in conversations with others, including high-profile comedians who’d struggled with the disease. Moe saw that there was tremendous comfort and community in open dialogue about these shared experiences and that humor had a unique power. Thus was born the podcast The Hilarious World of Depression and then Depresh Mode with John Moe.

Inspired by the immediate success of the podcast, Moe has written a remarkable investigation of the disease, part memoir of his own journey, part treasure trove of laugh-out-loud stories and insights drawn from years of interviews with some of the most brilliant minds facing similar challenges. Throughout the course of this powerful narrative, depression’s universal themes come to light, among them, struggles with identity, lack of understanding of the symptoms, the challenges of work-life, self-medicating, the fallout of the disease in the lives of our loved ones, the tragedy of suicide, and the hereditary aspects of the disease.

John Moe is the creator and host of the acclaimed mental health podcast Depresh Mode with John Moe; he has served as host of national public radio broadcasts such as Weekend America, The Hilarious World of Depression and Wits. His writing and reporting has been heard on All Things Considered, Morning Edition, Marketplace, Day to Day, and more. He's the author of four books and his writing appears in humor anthologies, The New York Times Magazine, McSweeney’s, and The Seattle Times. He’s a much in-demand public speaker.

"If David Sedaris wrote a book about depression, this would be his take." --Lee Woodruff, author of In an Instant

"Moe’s edifying, enjoyable take on the realities of living with depression will uplift any reader." --Publisher's Weekly (starred review)

"Moe is exactly the right person to give an attentive, irreverent voice to those suffering with depression." --Susan Maguire, Booklist

"Deeply moving and, against all odds, life-affirming. It's an ode to the blues that makes you feel better about being human." --Susan Orlean

"While you'll be laughing throughout, you'll also have a few 'a-ha' moments in the mix." --Chicago Tribune

"Moe takes the stigma out of discussing mental illness and offers camaraderie to those who suffer from depression... [His] words should supply help, hope, and humor to many readers. " --Library Journal

"More than once I woke my husband up shouting, "Oh my God, THIS. IT IS EXACTLY* THIS" while reading this book. He was concerned but no more than usual." --Jenny Lawson


"The feel-bad hit of the summer!" -- Colson Whitehead, author of The Underground Railroad