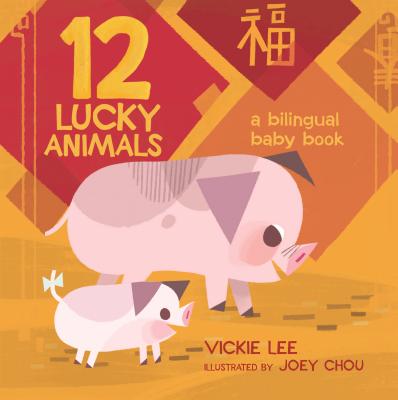 The adventure loving Dragon, the carefree Horse, and the artistic Goat are just three of the 12 Lucky Animals to be found in the Chinese zodiac, rendered here in bright illustrations. Use the wheel on the back cover to help little readers discover who their lucky animal is and how to pronounce its name in Chinese and English.

Vickie Lee is an acupuncturist and a Chinese medicine practitioner. Vickie graduated from Columbia University with a dual degree in East Asian studies and English literature. She is the author of Ruby's Chinese New Year and 12 Lucky Animals. She lives with her daughter and her husband in Brooklyn, New York.

Joey Chou was born in Taiwan and moved to sunny California in his early teens. There he received his BFA from Art Center College of Design in Pasadena. Joey works by day as a visual development artist on feature animated films, and by night as a picture book illustrator. He has illustrated such books as Group Hug, When the Snow Is Deeper Than My Boots Are Tall, Ruby's Chinese New Year, Monster & Son, and Disney Parks Presents: It's A Small World.

"Lee introduces and identifies the traits of the 12 animals of the zodiac in English and Chinese, while Chou, an animator, depicts each animal in a charming graphic style." —Publishers Weekly on 12 Lucky Animals

"This charming bilingual board book introduces the Chinese zodiac and language in an accessible way regardless of the language ability of readers." —School Library Journal on 12 Lucky Animals