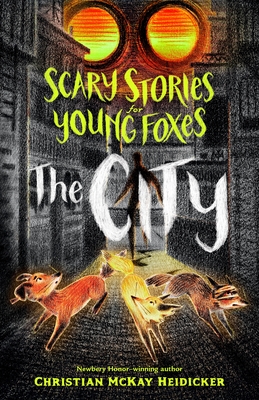 This is book number 2 in the Scary Stories for Young Foxes series.

From Christian McKay Heidicker, author of the Thieves of Weirdwood trilogy, comes the heart-stopping companion to the 2020 Newbery Honor recipient Scary Stories for Young Foxes, chronicling the adventures of three fox kits desperate to survive the terrors of a frightening new world.

Fox kit O-370 hungers for a life of adventure, like those lived long ago by Mia and Uly. But on the Farm, foxes know only the safety of their wire dens and the promise of eternal happiness in the White Barn. Or so they’re told. When O-370 gets free of his cage, he witnesses the gruesome reality awaiting all the Farm’s foxes and narrowly escapes with his life.

In a nearby suburb, young Cozy and her skulk are facing an unknown danger, one that hunts foxes. Forced to flee their den, they travel to a terrifying new world: the City. That’s where they encounter O-370, and where they’ll need to fight for their lives against mad hounds, killer robots, and the most dangerous of all creatures: humans.

Prepare to be scared.

"A frightfully accomplished companion novel that stands on its own." —Booklist

“Into the finest tradition of storytelling steps Christian McKay Heidicker with these highly original, bone-chilling, and ultimately heart-warming stories. All that’s needed is a blazing campfire and a delicious plate of peaches and centipedes.” —Kathi Appelt, Newbery Award honoree and National Book Award finalist

“These tales are not for the faint of heart. And once you start, you cannot stop until you’ve reached the end...Terrifying and wonderful. A nightmare book you’ll want to return to repeatedly.”—Betsy Bird, Fuse8 Productions

“A weird, creepy and thoroughly entertaining romp for readers of all ages! Highly recommended!”—Jonathan Maberry, New York Times-bestselling author of Rot & Ruin and Mars One

“Gather around this collection of finely written stories that will raise your hackles and tingle your whiskers. But reader, beware. The dangers within this book are very real. Fortunately, so is the bravery of foxes.”—Matthew Kirby, Edgar Award-winning author of Icefall and The Clockwork Three

“[F]or a certain type of reader—those lost in a battered copy of Alvin Schwartz's Scary Stories to Tell in the Dark—this is exactly the kind of book they’re hunting for… [A] chilling roller coaster of a read.”—Booklist, Starred Review

“Dark and skillfully distressing, this is a story for the bold.”—Kirkus Reviews