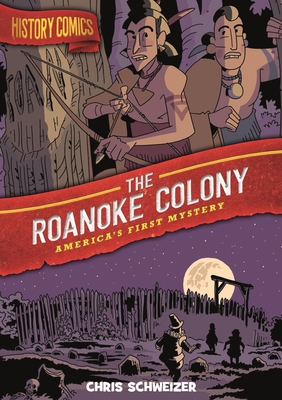 Turn back the clock with History Comics! In this graphic novel, investigate one of America's oldest and most intriguing mysteries.

Over a hundred years before the pilgrims, the very first English settlers arrived on Roanoke Island. But without warning, these colonists abandoned their new home and disappeared without a trace.

What happened to the colonists? To figure it out, we’ll need to investigate how these missing settlers got to Roanoke in the first place, and what the people already living there thought about these strange foreigners. It’s a case filled with brutal battles, perilous pirate ships, ruthless queens, scheming businessmen, and enough skeletons to fill a graveyard.

Chris Schweizer has been a college professor, a hotel manager, a movie theater projectionist, a guard at a mental hospital, a martial arts instructor, a set builder, a church music leader, a process server, a life-drawing model, a bartender, a car wash attendant, a bagboy, a delivery boy, a choirboy, a lawn boy, a sixth-grade social studies teacher, a busker, a janitor, a speakeasy proprietor, a video store clerk, a field hand, a deck hand, a puppeteer for a children's television show, a kickboxer, and a line worker at a pancake mix factory. But now he’s a cartoonist, and he likes that best. Chris is the author and illustrator of Maker Comics: Fix a Car! and The Princess of Rad Hats.