History Comics: The Challenger Disaster: Tragedy in the Skies (Paperback) 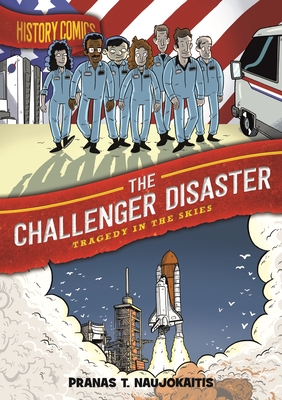 History Comics: The Challenger Disaster: Tragedy in the Skies (Paperback)

Let this graphic novel be your time machine! In History Comics, the new nonfiction graphic novel series from First Second, the past comes alive!

In History Comics: The Challenger Disaster, we turn the clock back to January 28, 1986. Seven astronauts boarded the space shuttle Challenger on what would be a routine mission. All eyes and cameras were on crew member Christa McAuliffe, a high school teacher, who was set to become the first private citizen in space. Excitement filled the air as the clock counted down to liftoff. But at T-plus seventy-three seconds after launch, the unthinkable happened . . .

What caused the midair explosion? In Pranas T. Naujokaitis's imaginative tale, set in a far-off future, a group of curious kids investigate the hard questions surrounding the Challenger explosion. Inspired by the legacy and sacrifice of the Challenger seven, they continue in their footsteps, setting out toward the stars and into the great unknown!

Pranas T. Naujokaitis is a cartoonist whose work ranges from all-age comics to slice-of-life autobio to handcrafted minicomics. His comic Laffy Meal was nominated for an Ignatz Award for Best Minicomic. He lives in Chicago with his wife and two cats.