Born to Draw Comics: The Story of Charles Schulz and the Creation of Peanuts (Hardcover) 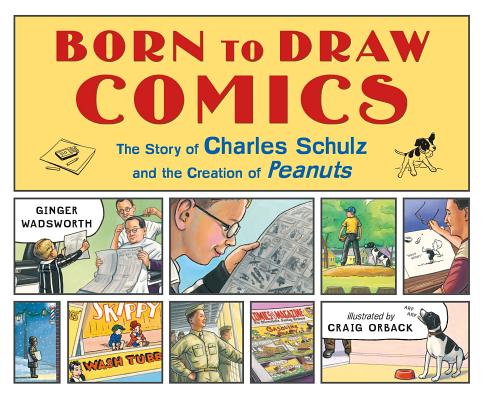 Born to Draw Comics: The Story of Charles Schulz and the Creation of Peanuts (Hardcover)

As a child, Charles split his free time between adventures outdoors with his friends and dog Spike, and daydreams and doodles inspired by the comics he loved to read. He longed to become a professional cartoonist, but saw his dreams deferred by unexpected challenges that laid ahead: military deployment to the European front of World War II, and the heartbreak of a family tragedy back home. Even so, Charles never lost sight of the hopeful joy of his early years and his love for Spike, both of which inspired PEANUTS. The comic strip went on to become the most popular and influential in comics history.

For fans of Brad Meltzer’s New York Times-bestselling picture book biography of the Muppets and Sesame Street creator, I Am Jim Henson.

Ginger Wadsworth is the author of many informational titles for young readers, including Words West: Voices of Young Pioneers, which was named a Nonfiction Honor Book by VOYA and received the Western Writers of America Spur Award for Juvenile Nonfiction, and First Girl Scout: The Life of Juliette Gordon Low. She lives in Orinda, California.

Craig Orback has illustrated many books for young readers, including Gifts from the Enemy and The Can Man, among others. His work has also appeared in children’s magazines and school textbooks. He lives with his family in Seattle.

"A wonderful homage to Schulz and a perfect first biography for young readers."—School Library Journal

"Fittingly, pictures and text pull equal weight in this warm and perceptive portrait of Schulz’s life . . . Orback deftly integrates references to Schulz’s work into scenes that convincingly evoke the era and the celebrated cartoonist’s earnestness and devotion to his craft."—Publishers Weekly

"After describing the loss of his mother and his service in WWII as a young man, the book focuses on his determination to become a syndicated cartoonist and his success . . .The paneled artwork gives context to Schulz’s life. An author’s note, a photo of Schulz, and more back matter add further details to this charming story."—Booklist