The Ascent to Godhood (The Tensorate Series #4) (Paperback) 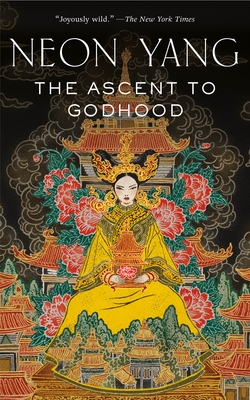 The Ascent to Godhood (The Tensorate Series #4) (Paperback)

This is book number 4 in the The Tensorate Series series.

Prepare yourself for The Ascent to Godhood, the fourth book in Neon Yang's silkpunk Tensorate series, a wide-ranging, imaginative, engaging playground that the New York Times lauded as "joyously wild."

Finalist for the 2020 Locus Award

The Protector is dead.

For fifty years, the Protector ruled, reshaping her country in her image and driving her enemies to the corners of the map. For half a century the world turned around her as she built her armies, trained her Tensors, and grasped at the reins of fate itself. Now she is dead. Her followers will quiver, her enemies rejoice.

But in one tavern, deep in rebel territory, her greatest enemy drowns her sorrows. Lady Han raised a movement that sought the Protector's head, yet now she can only mourn her loss. She remembers how it all began, when the Protector was young, not yet crowned, and a desperate dancing girl dared to fall in love with her.

Neon Yang (they/them) is the author of the Tensorate series of novellas from Tor.Com Publishing (The Red Threads of Fortune, The Black Tides of Heaven, The Descent of Monsters and The Ascent to Godhood). Their work has been shortlisted for the Hugo, Nebula, World Fantasy, Lambda Literary and Locus awards, while the Tensorate novellas were a Tiptree honoree in 2018. They have over two dozen works of short fiction published in venues including Tor.com, Uncanny Magazine, Lightspeed, Clarkesworld, and Strange Horizons.

Neon attended the 2013 class of Clarion West, and received their MA in Creative Writing from the University of East Anglia in 2016. In previous incarnations, they have been a molecular biologist, a writer for animation, comics and games, a science communicator, and a journalist for one of Singapore’s national papers.

Neon is currently based out of Singapore. They are queer and non-binary.

PRAISE FOR THE TENSORATE SERIES

“Yang conjures up a world of magic and machines, wild monsters and sophisticated civilizations, that you'll want to return to again and again.” —Annalee Newitz for Ars Technica

“Full of love and loss, confrontation and discovery. Each moment is a glistening pearl, all strung together in a wonder of world-creation.” — Ken Liu, Nebula, Hugo, and World Fantasy Award winner and author of The Grace of Kings and The Paper Menagerie

“A rebel commander in a complicated fantasy world recalls her triumphs and struggles in Yang’s superb fourth Tensorate novella. This thrilling adventure stands alone, as well as providing moving, complicated backstory for the earlier books in the series. Both fans and newcomers will be enthralled.” —Publishers Weekly on The Ascent to Godhood

“The vicious and deadly court intrigues of this volume provide a deeper exploration of the interior life of the Protectorate court.” —Booklist on The Ascent to Godhood

“Yang is a writer with a deft, evocative prose style, an epic approach to worldbuilding even in short forms, and frequently the ability to portray complex and compelling characters. There’s space for more stories in the Tensorate universe, a lot more, and I hope to read lots of them.” —Locus on The Ascent to Godhood

“Yang’s masterful world building is on display, from the manipulation of the metaphysical “slack” to the creatures who inhabit the harsh mountains, made even more impressive by the nonlinear narrative structure. The Old World feel of their "silkpunk" fantasy is made modern by smoothly interwoven gender-nonbinary characters, whose richness enhances the emotional impact of this short but compelling work.” —Booklist on The Descent of Monsters

“A fascinating world of battles, politics, magic and romance.” —Zen Cho, author of Sorcerer to the Crown

“Filled with memorable characters and set in a wonderfully imaginative and original universe.” —Aliette de Bodard, Nebula Award-winning author of The House of Shattered Wings

“Like a Miyazaki movie decided to jump off the screen and sear itself into prose, and in doing so became something entirely new.” —Indrapramit Das, author of The Devourers

“Yang's prose carries the reader along... A really good book.” —Locus on The Black Tides of Heaven

“Yang's writing is quiet, but it is the quiet of strength. It doesn't need to shout to be heard.” —Michelle West for The Magazine of Fantasy and Science Fiction