One Nation After Trump: A Guide for the Perplexed, the Disillusioned, the Desperate, and the Not-Yet Deported (Hardcover) 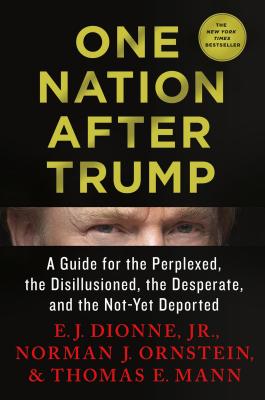 One Nation After Trump: A Guide for the Perplexed, the Disillusioned, the Desperate, and the Not-Yet Deported (Hardcover)

A call to action from three of Washington's premier political scholar-journalists, One Nation After Trump offers the definitive work on the threat posed by the Trump presidency and how to counter it.

American democracy was never supposed to give the nation a president like Donald Trump. We have never had a president who gave rise to such widespread alarm about his lack of commitment to the institutions of self-government, to the norms democracy requires, and to the need for basic knowledge about how government works. We have never had a president who raises profound questions about his basic competence and his psychological capacity to take on the most challenging political office in the world.

Yet if Trump is both a threat to our democracy and a product of its weaknesses, the citizen activism he has inspired is the antidote. The reaction to the crisis created by Trump’s presidency can provide the foundation for an era of democratic renewal and vindicate our long experiment in self-rule.

The award-winning authors of One Nation After Trump explain Trump’s rise and the danger his administration poses to our free institutions. They also offer encouragement to the millions of Americans now experiencing a new sense of citizenship and engagement and argue that our nation needs a unifying alternative to Trump’s dark and divisive brand of politics—an alternative rooted in a New Economy, a New Patriotism, a New Civil Society, and a New Democracy. One Nation After Trump is the essential book for our era, an unsparing assessment of the perils facing the United States and an inspiring roadmap for how we can reclaim the future.

E.J. Dionne, Jr., is a columnist for The Washington Post, Senior Fellow at the Brookings Institution, and professor at Georgetown University. E.J. is the author of the New York Times bestseller, Why the Right Went Wrong.

Norman Ornstein is Resident Scholar the American Enterprise Institute and a contributing editor and columnist for National Journal and The Atlantic. He is the coauthor of the New York Times bestseller, It’s Even Worse Than It Looks.

Thomas E. Mann is a resident scholar at the Institute of Governmental Studies at the University of California, Berkeley and a Senior Fellow at the Brookings Institution. He is the coauthor of the New York Times bestseller, It’s Even Worse Than It Looks.

“If you’re still baffled by how Donald Trump got to live in the White House, or you want to make sure that no one like him ever lives there again—or both—One Nation After Trump is your must-read book for 2017.” —The Guardian

“If someone had hibernated through the 2016 election, woke up early this year and logged onto Twitter or turned on cable news and wondered, what the hell happened?, this would be the book to read. ... [An] important book.” —The New York Times Book Review

“[A] good-spirited and thoroughly readable exercise in envisioning a better America.” —The Washington Post

"A trio of acclaimed political scholars and journalists ... offer a unified voice of sanity in a world gone mad. ... A breath of hope but also a serious call to action: everyone needs to take part." —Kirkus Reviews