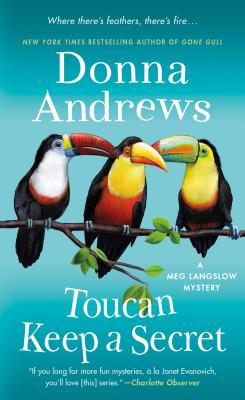 This is book number 23 in the Meg Langslow Mysteries series.

Toucan keep a secret, if one of them is dead in the twenty-third book in Donna Andrews' hilarious New York Times bestselling series


“This long-running cozy series shows no signs of losing its freshness.” —Publishers Weekly

Meg Langslow got a lot more then she bargained for when she agreed to take care of the toucan her friend, the Rev. Robyn Smith, is fostering at her church. One night, after bird duty, Meg hears the sound of hammering in the columbarium, where cremated remains are held. . .only to find an elderly parishioner lying dead in the crypt. The man was well-known around town, having become disgruntled with the church over the handling of his wife’s ashes. But what was he doing in the columbarium on this very night—and who had it in for him? Now it’s up to Meg to lead the investigation into the murder, the motive, and a long-buried Caerphilly mystery that seems to involve the toucan itself. . .

DONNA ANDREWS has won the Agatha, Anthony, and Barry Awards, an RT Book Reviews Award for best first novel, and four Lefty and two Toby Bromberg Awards for funniest mystery. She is a member of the Mystery Writers of America, Sisters in Crime, and Novelists, Inc. Andrews lives in Reston, Virginia. She has written over 30 books in the Meg Langslow mystery series.

"This long-running cozy series shows no signs of losing its freshness." —Publishers Weekly on Toucan Keep a Secret

"Fans will find all the beloved hallmarks of this award-winning series: fresh characters, an engaging puzzle, and delightful humor.” —Library Journal on Gone Gull

"A long-running series that gets better all the time. A fine blend of academic satire, screwball comedy, and murder." —Booklist on Lord of the Wings

"With its well-spun plots and distinctive characters, Andrews’s amusing avian-named series shows no signs of growing stale." — Publishers Weekly on Die Like an Eagle

"As always, Andrews laces this entertaining whodunit with wit, a fine storyline and characters we've come to know and love." —Richmond Times-Dispatch on The Real Macaw

"With colorful characters, a solid mystery and laugh-out-loud moments . . . readers will have a rollicking good time." —RT Book Reviews (4 stars) on Swan for the Money

“With its well-spun plots and distinctive characters, Andrews’s amusing avian-named series shows no signs of growing stale.” —Publishers Weekly on Die Like an Eagle

“Few writers are as adept as Andrews at affectionately managing a large and varied cast of eccentric characters and concealing the murderer among them until the very end of the book.” —Denver Post on Six Geese A-Slaying