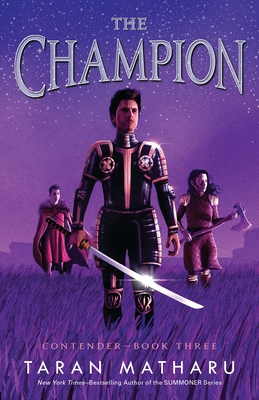 This is book number 3 in the Contender series.

In Taran Matharu's The Champion, the explosive final book in the Contender trilogy, Cade and his friends wage the ultimate battle for their lives—and the fate of Earth itself—in the Game set by the cruel and mysterious Pantheon…

Cade has managed to survive the duel with the Hydra Alpha—barely. But the Games are far from over.

By order of their cruel and mysterious overlord, Abaddon, Cade and his friends are sent off to war against the Greys, a humanoid race who have far surpassed humans in technology on their home planet. This attempt to move up the leaderboard, however, leads Cade to a game-changing revelation: The Pantheon—the millennia-old alien masterminds behind the Games—have a weakness.

With the right artifacts scavenged from the land of Acies and a heavy dose of courage and luck, Cade has exactly one chance to end their tyranny forever. But if he fails, the lives of his friends—and the survival of Earth itself—will be forfeit.

Taran Matharu is the author of the Contender trilogy and the New York Times–bestselling Summoner series: The Novice (Book One), The Inquisition (Book Two), The Battlemage (Book Three), The Outcast (the prequel), and The Summoner's Handbook; the series has been compared to the Harry Potter and Lord of the Rings series. Taran Matharu lives in London.

Praise for The Challenger:

"Matharu presents a unique world with fantasy, science fiction, and historical fiction elements. ... The action scenes are riveting and in perfect balance with the characterizations, as the diverse group of teens reacts realistically to the violence and horror around them. A complex, well-blended mix of plot and characterization, perfect for fans of fantasy battle royale stories." —School Library Journal

Praise for The Chosen:

"Maze Runner meets Land of the Lost in this engaging page-turner full of twists and turns in an epic tale of survival and history. ... With dinosaurs, Romans, and a battle for survival, The Chosen is absolutely fascinating and quite the page turner. ... Highly recommend for fans of fantasy/sci-fi looking for something unique and full of suspense/mystery." —YA Books Central

Praise for The Novice:

“This plot-focused fantasy adventure will be a satisfying read for a wide age range of readers, especially fans of role-playing games and Christopher Paolini.” —VOYA

“Taran Matharu . . . racked up more than a million reads for his first novel, Summoner, in only four months.” —NBCnews.com

Praise for The Inquisition:

Praise for The Battlemage: