The Long War: The Inside Story of America and Afghanistan Since 9/11 (Hardcover) 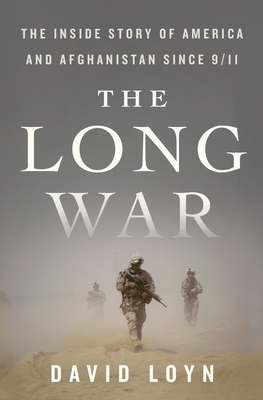 The Long War: The Inside Story of America and Afghanistan Since 9/11 (Hardcover)

Just as U. S. soldiers and diplomats pulled out of Afghanistan, supposedly concluding their role and responsibility in the two-decade conflict, the country fell to the Taliban. In The Long War, award-winning BBC foreign correspondent David Loyn uncovers the political and military strategies—and failures—that prolonged America’s longest war.

The story of The Long War is told by the generals who led it through the hardest years of combat as surges of international troops tried to turn the tide. Generals, which include David Petraeus, Stanley McChrystal, Joe Dunford and John Allen, were tested in battle as never before. With the reputation of a “warrior monk,” McChrystal was considered one of the most gifted military leaders of his generation. He was one of two generals to be fired in this most public of commands.

Holding together the coalition of countries who joined America’s fight in Afghanistan was just one part of the multi-dimensional puzzle faced by the generals, as they fought an elusive and determined enemy while responsible for thousands of young American and allied lives. The Long War goes behind the scenes of their command and of the Afghan government.

The fourth president to take on the war, Joe Biden ordered troops to withdraw in 2021, twenty years after 9/11, just as the Taliban achieved victory, leaving behind an unstable nation and an unforeseeable future.

DAVID LOYN was an award-winning foreign correspondent for thirty years for the BBC. He is an authority on Afghanistan, a country he has visited every year since 1994. In 2017, he worked for a year as an adviser in the office of the Afghan president Ashraf Ghani. His book Frontline: The True Story of the British Mavericks who Changed the Face of War Reporting was shortlisted for the 2006 Orwell Prize. He lives in London.

"Loyn’s pages are steeped in tragic misinterpretation and always with a sympathy for ordinary people who deserved much better. A well-executed and dispiriting study of imperial overreach and cultural collision." —Kirkus (starred review)

"This deeply reported chronicle of America’s “forever war"...offers blunt and persuasive assessments...Distinguished by its granular detail and insider access, this is an authoritative study of where things went wrong." —Publishers Weekly (starred review)

Praise for In Afghanistan:

“It would be naive to suggest that the odds favour success. Loyn's excellent primer explains why, and should be slipped into President Obama's Christmas stocking.” —Max Hastings for The Sunday Times (UK)

“The US will have a new leader by 2009, as perhaps will Britain. He should read this superb book before he makes matters worse.” —Daily Telegraph (UK)

“[There are] terrific—and terrifying—tales in this short, sharp book. . .In Afghanistan targets the educated general reader, but it could educate generals.” —New York Post

“I could not have enjoyed it more and think it quite excellent. It is a great pity some of those who involved us in what is going on now did not understand what we would be up against.” —General Lord Guthrie, Head of Britain’s armed forces when the Afghan war was launched in 2001