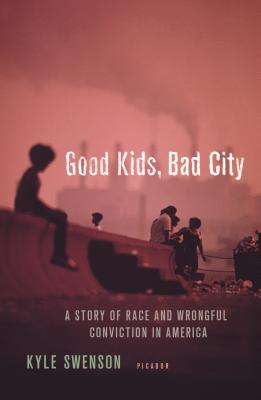 From award-winning investigative journalist Kyle Swenson, Good Kids, Bad City is the true story of the longest wrongful imprisonment in the United States to end in exoneration, and a critical social and political history of Cleveland, the city that convicted them.

In the early 1970s, three African-American men—Wiley Bridgeman, Kwame Ajamu, and Rickey Jackson—were accused and convicted of the brutal robbery and murder of a man outside of a convenience store in Cleveland, Ohio. The prosecution’s case, which resulted in a combined 106 years in prison for the three men, rested on the more-than-questionable testimony of a pre-teen, Ed Vernon.

The actual murderer was never found. Almost four decades later, Vernon recanted his testimony, and Wiley, Kwame, and Rickey were released. But while their exoneration may have ended one of American history’s most disgraceful miscarriages of justice, the corruption and decay of the city responsible for their imprisonment remain on trial.

Interweaving the dramatic details of the case with Cleveland’s history—one that, to this day, is fraught with systemic discrimination and racial tension—Swenson reveals how this outrage occurred and why. Good Kids, Bad City is a work of astonishing empathy and insight: an immersive exploration of race in America, the struggling Midwest, and how lost lives can be recovered.

KYLE SWENSON is a reporter for The Washington Post. A finalist for the Livingston Award for Young Journalists, he is also the recipient of the Society of Professional Journalists’ Sigma Delta Chi Award for Feature Reporting. His work has appeared in The Village Voice, The New Republic, and Longreads. A graduate of Kenyon College, he lives in Washington, D.C. Good Kids, Bad City is his first book.

"A compelling, beautifully written book that goes well beyond that initial journalistic probe into a grave injustice ... A powerful addition to the growing literature on the failures of America’s criminal justice system. It is also a gripping, novelistic account of what happened to the three defendants and their lone accuser after the convictions, a frank confession of the methods and emotions of an obsessed reporter, and a poignant meditation on the dark side of Cleveland."--Mark Whitaker, The Washington Post

"It's the story of a grave injustice, whose long-overdue correction delivers a strong emotional punch when it finally arrives."—Alec MacGillis, The New York Times Book Review

"Investigative journalist Swenson turns his expertise towards uncovering the truth about how—and why—three African-American men were charged, convicted and sent to prison for decades for a murder they didn’t commit. This incredible true story about the three men’s eventual exonerations lays bare the biases of a very broken justice system." —Parade.com

"[A] vivid, extensively researched debut...Cinematically written, this powerful tragedy of racial injustice and urban dysfunction will make readers question the idea that America can promise 'justice for all.'" —Publishers Weekly (starred review)

"Compelling and heartfelt...In this sharply written, emotionally resonant rendering, the author makes crystal-clear the heartbreaking realities of wrongful imprisonment, race, and the many flaws of the American criminal justice system." —Kirkus Reviews

"With dramatic, cinematic detail, Swenson connects this to a larger problem by showing how federal policies on both the war on drugs and the war on crime have devastated targeted communities in Cleveland and across the country, and have resulted in one of the most overburdened and draconian justice systems in the western world. Though small reforms and cosmetic changes may be slowly lifting the burden of history, this book questions the very nature of the justice system—and whom it benefits."--BookPage

"Good Kids, Bad City is a searing examination of a wrongful conviction case made all the more outrageous—and thus, necessary reading—in the context of an incisive examination of Cleveland, and how criminal justice failures are a microcosm of the city's problems. With heart and brio, Kyle Swenson illuminates the plight of three men done cruelly wrong for far too many decades, and the work required to ensure this cannot keep happening." —Sarah Weinman, author of The Real Lolita: The Kidnapping of Sally Horner and the Novel That Scandalized the World

“A blistering indictment of the justice system and a hard-boiled portrait of post-industrial America, Good Kids, Bad City lays out the constellation of institutional failures that put three innocent men behind bars for decades. Kyle Swenson captures the pain, the frustration, and the hopes of these men with sensitivity and heart, while addressing his native Cleveland with the tough love of a local who hasn't yet given up on his town.” —Albert Samaha, author of Never Ran, Never Will

“Kyle Swenson is a marvelous reporter with an equally keen eye for small human moments and sweeping civic history. Good Kids, Bad City tells a new Midwestern history and examines the brutality of our justice system, but above all I will remember the people—the lives—that Swenson depicts in all their glorious intimacy. This book sings." —John Lingan, author of Homeplace: A Southern Town, a Country Legend, and the Last Days of a Mountaintop Honky-Tonk

"Kyle Swenson lays bare the full spectrum of American tragedy: from the volatile streets of 1970s Cleveland to the cold machinations of the city’s justice system to the sparks of hope and outrage that refuse to dim in the hearts of those railroaded by that system’s blatant racism. Good Kids, Bad City is relentless reporting and impactful storytelling at its best." —Joshua Wheeler, author of Acid West

“Good Kids, Bad City got its grimy Rust Belt hooks in me from the opening line and never let me go. It's a page-whizzing narrative, but it's also a critical work of history, an investigative triumph, and a gorgeously rendered portrait of innocent men who deserved so much more from their city and their government.” —Joe Tone, author of Bones: Brothers, Horses, Cartels, and the Borderland Dream