The Electric War: Edison, Tesla, Westinghouse, and the Race to Light the World (Hardcover) 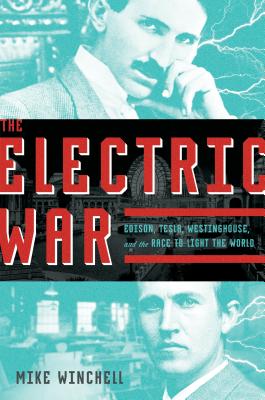 The Electric War: Edison, Tesla, Westinghouse, and the Race to Light the World (Hardcover)

The spellbinding true account of the scientific competition to light the world with electricity.

In the mid-to-late-nineteenth century, a burgeoning science called electricity promised to shine new light on a rousing nation. Inventive and ambitious minds were hard at work. Soon that spark was fanned, and a fiery war was under way to be the first to light—and run—the world with electricity. Thomas Alva Edison, the inventor of direct current (DC), engaged in a brutal battle with Nikola Tesla and George Westinghouse, the inventors of alternating current (AC). There would be no ties in this race—only a winner and a loser. The prize: a nationwide monopoly in electric current. Brimming with action, suspense, and rich historical and biographical information about these brilliant inventors, here is the rousing account of one of the world’s defining scientific competitions.

Mike Winchell is the award-winning author of The Electric War, which was an NSTA Outstanding Science Trade Book, an NSTA Best STEM Book of the Year, and winner of the CNY Book Award, among other honors. A veteran English teacher and a secondary education curriculum specialist, he is also the editor of the Been There, Done That anthology series. He lives in upstate New York.

"Readers will be electrified by his three main characters and further enlightened by numerous period photographs."--Booklist

"The war of the currents and its larger-than-life personalities are illuminated by a flickering light. . . the men and the historical events provide plenty of drama."--Kirkus Reviews

"A narrative nonfiction account of cutthroat competition . . . the prose [is] quite inviting and the text is rich with anecdotes. . . which illustrates the debut author’s careful research and commitment to storytelling. Purchase where narrative nonfiction flies off the shelves."--School Library Journal