Game 7, 1986: Failure and Triumph in the Biggest Game of My Life (Paperback) 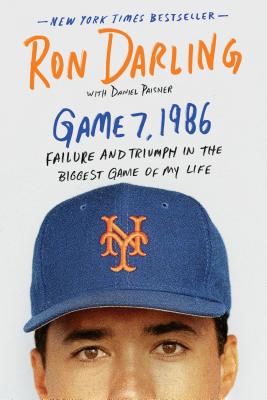 Game 7, 1986: Failure and Triumph in the Biggest Game of My Life (Paperback)

An inside look at one of the most famous baseball games of all time, game seven of the 1986 World Series from Emmy-winning baseball analyst Ron Darling, the METS' starting pitcher, in his words.

Every little kid who's ever taken the mound in Little League dreams of someday getting the ball for Game Seven of the World Series. Ron Darling got to live that dream - only it didn't go exactly as planned. In New York Times bestselling Game 7, 1986, the award-winning baseball analyst looks back at what might have been a signature moment in his career, and reflects on the ways professional athletes must sometimes shoulder a personal disappointment as their teams find a way to win.

Published to coincide with the anniversary of the 1986 New York Mets championship season, Darling's book breaks down one of baseball's great "forgotten" games - a game that stands as a thrilling, telling, and tantalizing exclamation point to one of the best-remembered seasons in Major League Baseball history.

Working once again with bestselling collaborator Daniel Paisner, who teamed with the former All-Star pitcher on his acclaimed 2009 memoir, The Complete Game, Darling offers a book for the thinking baseball fan, a chance to reflect on what it means to compete at the game's highest level, with everything on the line.

Ron Darling is a New York Times bestselling author and Emmy Award-winning baseball analyst for TBS, the MLB Network, SNY, and WPIX-TV, and author of The Complete Game. He was a starting pitcher for the New York Mets from 1983 to 1991 and the first Mets pitcher to be awarded a Gold Glove.

DANIEL PAISNER is the author or co-author of more than sixty books, including sixteen New York Times bestsellers. As a ghostwriter, he has collaborated with such leading personalities as tennis great Serena Williams; football legend Ray Lewis; two-term Ohio governor John Kasich; Academy Award-winning actors Denzel Washington, Whoopi Goldberg and Anthony Quinn; and, former world-champion longboard surfer Izzy Paskowitz. He is the winner of two NAACP Image Awards for his work with Shark Tank panelist and serial entrepreneur Daymond John. His novel A Single Happened Thing was named an Indies Finalist as best book of the year (literary fiction) by the editors of Foreword Reviews, and his previous novel, Mourning Wood, and a non-fiction account of the aftermath of the historic home run race of 1998—The Ball: Mark McGwire's 70th Home Run Ball and the Marketing of the American Dream—both long out of print, were reissued in new digital and paperback editions.

"The book ... is a departure from the typical sports narrative. You know—hero overcomes long odds, shines in big moment and the world swoons." —Anthony McCarron, The New York Daily News

"[Ron Darling's] new book is a reminder of the gulf that separates players from fans."—Ian Crouch, The New Yorker

"[Delivers] just what the title promises: a close analysis of one game, the night when Darling performed poorly but the Mets won the World Series anyway." —New York Times

"What makes this book so interesting is how Darling puts the reader into his head as he stands on the mound in Game 7" —Bob D'Angelo, The Tampa Tribune

"These Mets saw themselves as a team of destiny, brimming with the necessary talent, killer instinct, arrogance, and even a certain selfishness to claw back the game Darling had almost given away. These hard-partying ballplayers proved, in Darling’s words, 'too young, too full of ourselves' to be great for more than one season, wasting their gifts and a very real chance at a dynasty. But in ’86, they were magic." —Kirkus Reviews