The Lonely City: Adventures in the Art of Being Alone (Paperback) 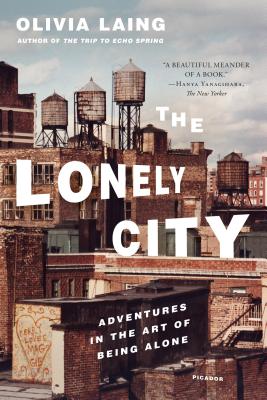 The Lonely City: Adventures in the Art of Being Alone (Paperback)

Finalist for the National Book Critics Circle Award in Criticism

#1 Book of the Year from Brain Pickings

A dazzling work of biography, memoir, and cultural criticism on the subject of loneliness, told through the lives of iconic artists, by the acclaimed author of The Trip to Echo Spring.

When Olivia Laing moved to New York City in her mid-thirties, she found herself inhabiting loneliness on a daily basis. Increasingly fascinated by the most shameful of experiences, she began to explore the lonely city by way of art. Moving from Edward Hopper’s Nighthawks to Andy Warhol’s Time Capsules, from Henry Darger’s hoarding to David Wojnarowicz’s AIDS activism, Laing conducts an electric, dazzling investigation into what it means to be alone, illuminating not only the causes of loneliness but also how it might be resisted and redeemed.

Humane, provocative, and moving, The Lonely City is a celebration of a strange and lovely state, adrift from the larger continent of human experience, but intrinsic to the very act of being alive.

Olivia Laing is a writer and critic. Her first book, To the River, was published by Canongate to wide acclaim and shortlisted for the Ondaatje Prize and the Dolman Travel Book of the Year. She has been the deputy books editor of the Observer, and writes for The Guardian, New Statesman, and The Times Literary Supplement, among other publications. She is a MacDowell Fellow, and has received grants from the Arts Council and the Authors’ Foundation. She lives in Cambridge, England.

"A beautiful meander of a book" --Hanya Yanagihara, The New Yorker

"An extraordinary more-than-memoir; a sort of memoir-plus-plus, partway between Helen MacDonald's H Is for Hawk and the diary of Virginia Woolf." --Maria Popova

"Olivia Laing, in her new book, The Lonely City, picks up the topic of painful urban isolation and sets it down in many smart and oddly consoling places. She makes the topic her own. ... Perhaps the best praise I can give this book is to concur with Ms. Laing’s dedication: 'If you’re lonely, this one’s for you.' "—Dwight Garner,The New York Times

"This book serves as both provocation and comfort, a secular prayer for those who are alone—meaning all of us."—The New York Times Book Review

"One of the finest writers of the new non-fiction...compelling and original."—Harper's Bazaar

"An uncommonly observant hybrid of memoir, history and cultural criticism... a book of extraordinary compassion and insight.”—San Francisco Chronicle

"Laing is an astute and consistently surprising culture critic who deeply identifies with her subjects' vulnerabilities... absolutely one of a kind."—Maureen Corrigan, NPR's Fresh Air

"It's not easy to pull off switching between criticism and confession—and like Echo Spring, The Lonely City is an impressive and beguiling combination of autobiography and biography, a balancing act that Laing effortlessly performs. Her gift as a critic is her ability to imaginatively sympathize with her subject in a way that allows the art and life of the artist to go on radiating meaning after the book is closed."—Elle

“…A lovely thing. Exceptionally skillful at changing gears, Ms. Laing moves fluently between memoir, biography (not just of her principal cast but of a large supporting one), art criticism and the fruits of her immersion in ‘loneliness studies'...She writes about Darger and the rest with insight and empathy and about herself with a refreshing lack of exhibitionism.…Every page of The Lonely City exudes a disarming, deep-down fondness for humanity. ”—The Wall Street Journal

"Laing’s prose is elegant and concise, with a breath of Joan Didion.... In its interdisciplinary scope and mix of culture, theory, and memoir, The Lonely City brings to mind other nonfiction hits of recent years, books like Maggie Nelson’s The Argonauts or Leslie Jamison’s The Empathy Exams."—The Millions

“The Lonely City bristles with heart-piercing wisdom... It's a ghostly blueprint of urban loneliness — an emotion that Laing calls ‘a city in itself’—that reminds us how loneliness can sometimes bring us together.”—Jason Heller, NPR.org

“Laing’s meditation gradually gathers force into a manifesto, taking aim at the assumption of simple, unknowable 'mental illness' to explain the life and creative work of the outsider artist Henry Darger or of Solanas—or of Warhol, for that matte...Without glamorizing either loneliness or the urban decay of New York in the ’70s, The Lonely City builds an impassioned case for difficulty and difference, for social rebellion and the unpredictable artistic richness that can result."—The Washington Post

“Laing, who used group biography to examine the connections between alcoholism and literature in The Trip to Echo Spring, here performs an almost magical trick: Reminding us of how it feels to be lonely, this book gently affirms our connectedness.”—The Boston Globe

"Laing is always circling back toward a piercingly relevant observation. And, oh, those observations! ... Laing is a great critic, not least because she understands that art can and often does manifest multiple conflicting meanings and desires at once."—Laura Miller, Slate

"Laing writes with a compassion and curiosity rarely seen in any genre...Although I read The Lonely City in the same urban spaces that usually impart a familiar loneliness—loud cafés, quiet apartments and slow trains choked with strangers—I felt different while reading it....Something surprising happened, something Laing most likely intended"—The Rumpus

“[An] acute, nervy and personal investigation into urban solitude….[Laing] writes with lyrical clarity, empathy, and a knack for taking a wandering, edgy path, stretching themes (and genres), while never losing an underlying urgency….A group biography all in one, which takes a difficult, almost taboo, subject and deftly turns it over anew.”—New Statesman

"Luminously wise and deeply compassionate, The Lonely City is a fierce and essential work. Laing is a masterful biographer, memoirist and critic. Fearlessly tracing the roots of loneliness, its forbidding consequences, and its complicated and beautiful relationship with art, it is powerful, poignant and magical. Reading it made my heart ache yet filled me with hope for the world."—Helen Macdonald, author of H is for Hawk

"[Laing] is a brave writer whose books, in their different ways, open up fundamental questions about life and art…What’s startling is that her book succeeds in offering its readers a redemptive experience comparable to the one she’s describing. Reading it at a lonely moment, I found that I responded easily to the confident muscularity of her prose and the intimate way she described emotional states. I became swiftly less lonely as I did so, earthed by the company of Wojnarowicz, Warhol and Laing herself….This triumphant book is in part an appeal for us to value the kind of loneliness that can be rendered, by the intimacy of art, both tolerable and shareable.”—The Daily Telegraph (London)

“By focusing on four artists…Laing’s writing becomes expansive, exploring their biographies, sharing art analysis, and weaving in observations from periods of desolation that was at times “cold as ice and clear as glass.” She invents new ways to consider how isolation plays into art or even the Internet (which turns her into an obsessed teenager, albeit one who calls the screen her 'cathected silver lover'). For once, loneliness becomes a place worth lingering.”—Publishers Weekly

"A remarkable combination of personal mediation and psychological and artistic inquiry, The Lonely City is always superbly written, fascinating and often sharply moving. Ultimately the book has a paradoxical effect: at the same time as it makes one aware of one's own inescapable solitude, it leaves one feeling less alone."—Adam Foulds, author of In the Wolf's Mouth

“An extraordinary more-than-memoir; a sort of memoir-plus-plus, partway between Helen MacDonald’s H Is for Hawk and the diary of Virginia Woolf; a lyrical account of wading through a period of self-expatriation, both physical and psychological, in which Laing paints an intimate portrait of loneliness.... The Lonely City is a layered and endlessly rewarding book, among the finest I have ever read.”
- Maria Popova, Brain Pickings