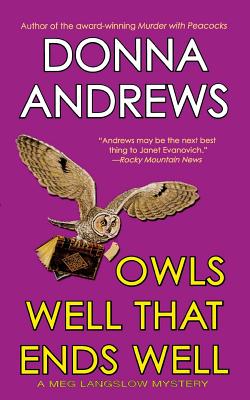 This is book number 6 in the Meg Langslow Mysteries series.

Meg Langslow was actually looking forward to renovating the old Victorian mansion she and her boyfriend Michael bought. But she wasn't thrilled by the lifetime of junk accumulated by the house's eccentric previous owner, Edwina Sprocket. The easiest solution: hold the end-all and be-all of gigantic yard sales. But when the event attracts the late Miss Sprocket's money-hungry heirs, the over-enthusiastic supporters of some endangered barn owls, and customers willing to go to any lengths to uncover a hidden treasure, Meg suspects things have gotten a "little" out of hand
Then an antiques dealer is found stuffed in a trunk with his head bashed in--and the yard sale turns into a day's-long media circus. Even worse, the suspect arrested for the crime is the person Michael needs to secure academic tenure. Now, Meg is juggling an ever-growing list of suspects. And she's going to have to outthink and outwit one clever murderer who lives by "everything must go

Donna Andrews is the author of the Meg Langslow mysteries, including "Stork Raving Mad" and "Swan for the Money." She has won the Agatha, Anthony, and Barry awards, a "Romantic Times" award for best first novel, and two Lefty and two Toby Bromberg Awards for funniest mystery. When not writing fiction, Andrews is a self-confessed nerd, rarely found away from her computer, unless she's messing in the garden. She lives in Reston, Virginia.