Waiting for the Punch: Words to Live by from the WTF Podcast (Hardcover) 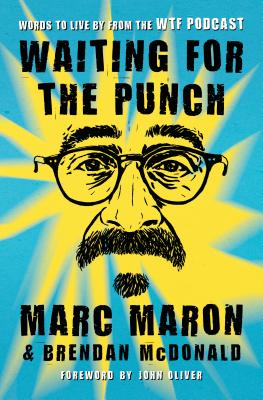 Waiting for the Punch: Words to Live by from the WTF Podcast (Hardcover)

"Public figures as you rarely if ever hear them: strikingly personal, surprisingly open, and profoundly emotional."
— Entertainment Weekly

"I’m British, so I’m medically dead inside, but even I can’t help but open up whenever I talk to Marc. He uses his honestly like a scalpel, cutting himself open in front of anyone he’s talking to, and in doing so, invites you to do the same."
—John Oliver

From the beloved and wildly popular podcast WTF with Marc Maron comes a book of intimate, hilarious and life changing conversations with some of the funniest, and most important people in the world like you’ve never heard them before. Waiting for the Punch features the stories and thoughts of such luminaries as Amy Schumer, Mel Brooks, Will Ferrell, Amy Poehler, Sir Ian McKellen, Lorne Michels, Judd Apatow, Lena Dunham, Jimmy Fallon, RuPaul, Louis CK, David Sedaris, Bruce Springsteen, and President Obama.

This book is not simply a collection of these interviews, but instead something more wondrous: a running narrative of the world’s most recognizable names working through the problems, doubts, joys, triumphs, and failures we all experience. With each chapter covering a different topic: parenting, childhood, relationships, sexuality, success, failures and others, Punch becomes a sort of everyman’s guide to life. Barack Obama candidly discusses the challenges of the presidency, and the bittersweet moments of seeing your children grow up. Amy Schumer recounts the pain of her parents’ divorce. Molly Shannon uproariously remembers the time she and her best friend hopped a plane from Ohio to New York City when they were twelve on a dare. Amy Poehler dishes on why just because you become a parent doesn’t mean you have to like anybody else’s kids but your own. Bruce Springsteen expounds on the dual nature of desperation to both motivate and devastate.

Full of stories that are at once laugh-out loud funny, heartbreakingly honest, joyous, tragic and powerful, Waiting for the Punch is a book to be read from cover to cover, but it is also one to return to again and again.

Marc Maron is a stand-up comedian, actor, author and host of the podcast WTF with Marc Maron. He has appeared in his own comedy specials on HBO, Comedy Central, EPIX and Netflix, created the IFC sitcom Maron, and stars in the Netflix Original Series GLOW. He lives in Los Angeles.

"As readers will expect, there are plenty of laugh-out-loud moments, but what is more surprising and refreshing is how many profound and powerful insights Maron manages to draw from his guests. An insightful collection of interviews about what it means to be human. This book, it turns out, helps explain W is TF."
— Kirkus

“People say stuff to [Marc] that you can’t imagine them saying to anyone else.” – Ira Glass

“ Somehow [Maron] is able to elicit from his guests [a] vulnerability…The interviews often end up feeling more like therapy sessions… A must listen.” – The New York Times

“A must-listen for fans and students of comedy as well as a place for an increasingly impressive, high-profile roster of comedians, artists, musicians, and writers to reveal themselves and publicly wrestle their demons.”
– The AV Club