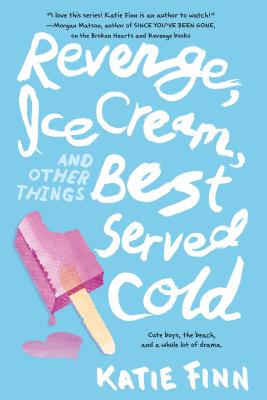 This is book number 2 in the A Broken Hearts & Revenge Novel series.

After the humiliating events on the 4th of July, Gemma's trying to grapple with the fact that Hallie knew her true identity all summer, and that she was the one who stole Teddy from her.
Gemma vows revenge, but things immediately get more complicated than she planned. Her dad forces her to get a job, and the only one she can find involves scooping ice cream all day. Ford, Gemma's longtime crush, has arrived in the Hamptons, and is cuter than ever. Josh is refusing to speak to her after finding out she lied to him. And to top it all off, Teddy is back in the picture, and closer to home than Gemma would like.

Gemma and Hallie find themselves locked in an escalating revenge cycle involving everything from strawberry syrup to stolen identities. But just when Gemma thinks she has the upper hand, the biggest bombshell of all is dropped. And it's one that threatens to change her life forever.

Katie Finn is the author of the Top 8 trilogy. She's never plotted revenge on anyone (who didn’t deserve it) but has been known to assume another identity. To this day, she and Morgan Matson have never been seen in the same room. She lives in Los Angeles, in a house she wishes was a lot closer to the beach.

“A mostly lighthearted and playful story of mistaken identity and revenge. There's a good amount of physical humor (primarily at Gemma's expense), and what generally reads as a romantic comedy takes a dark turn as it sets up the next installment in this series.” —Publishers Weekly on Broken Hearts, Fences and Other Things to Mend

“There is much for teen readers to like here: snappy and snippy dialogue, embarrassing situations, blossoming romance, pool parties and the constant tension of maintaining a secret.” —Kirkus Reviews on Broken Hearts, Fences and Other Things to Mend