The Stager: A Novel (Paperback) 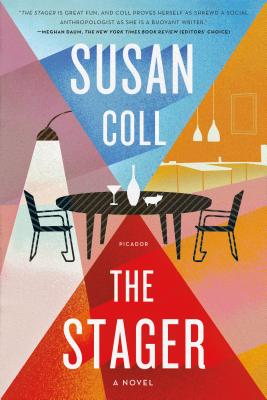 The Stager: A Novel (Paperback)

As a stager, Eve Brenner orchestrates the quick cosmetic fixes that make a house desirable to a prospective buyer. But when she steps into the home of an investment banker and her tennis-star husband, the Stager realizes that she knows too much about one of the house's occupants: The wife, beautiful and brilliant Bella, was once her best friend.

While Bella's life has followed a steady upward trajectory, Eve's has unraveled-and she isn't the only one struggling with Bella's success. Lars Jorgenson was a handsome Wimbledon finalist when he first met his wife. Now he is depressed, obese, and slowly coming undone on prescription medications. Their ten-year-old daughter, Elsa, is dealing with multiple losses: her parents are preparing to move the family overseas, her rabbit has run away, and she soon will be separated from her beloved nanny. Lonely and vulnerable, she bonds with the Stager while her parents are away assessing the family's next home-and forges a new friendship that gives everyone cause for concern. A dark comedy of real estate and rabbits, The Stager questions matters of friendship, family, and loyalty to hilarious effect.

Susan Coll is the Events and Programs Director at Politics & Prose Bookstore in Washington, D.C. She is the author of the novels Beach Week, Acceptance, Rockville Pike, and karlmarx.com. Acceptance was made into a television movie starring Joan Cusack in 2009. She lives in Washington, D.C.

“The Stager is great fun, and Coll proves herself as shrewd a social anthropologist as she is a buoyant writer.” —Meghan Daum, The New York Times Book Review (Editors’ Choice)

“Hilarious ... Throughout this antic tale, Coll shows us what happens to people when they don't feel heard or seen, when they wind up walking around as human versions of a house that's been carefully denuded of the things that made it warm and welcoming-that made it a home.” —Julie Klam, The Washington Post

“Fun to read, and smart-but not snarky...Susan Coll doesn't so much skewer her characters as reveal them.” —Chicago Tribune

“Sometimes a book just takes you by the hand and swings you deliriously in a new dance-that is The Stager, Susan Coll's brilliant comic novel.... I loved it.” —Cathleen Schine, author of Fin & Lady and The Three Weissmanns of Westport

“Wry metaphors of suburban rot abound.... [this is] the work of a very good comic novelist. . . .Chuck your attachment to rationality and cheerfully follow Coll down the rabbit hole.” —The Washingtonian

“Overgrown houses, failed planned communities, and a consumerist culture contrast with the stager's efforts to declutter and sterilize in this offbeat social satire. Coll takes on marriage, friendship, and fidelity to dark-comic effect. ” —Booklist

“Dark, luminous, and hilarious, The Stager draws its radiant power from the great time-tested themes: love, betrayal, and the redemptive power of rabbits. At the height of her powers, Susan Coll reveals her mastery of the wry and delicious line, of the bizarre and tender moment--and of hope.” —Dylan Landis, author of Normal People Don't Live Like This

“What a delight to follow Susan Coll on her tour of one family's surreal unraveling. Sly and wise, Coll is a stager extraordinaire, allowing us to peer behind the curtain of suburban success and excess. I loved this novel's wild wit. Now I want to adopt the Jorgenson family's precocious kid--and their stoned rabbit.” —Lisa Zeidner, author ofLove Bomb