Why the Germans? Why the Jews?: Envy, Race Hatred, and the Prehistory of the Holocaust (Paperback) 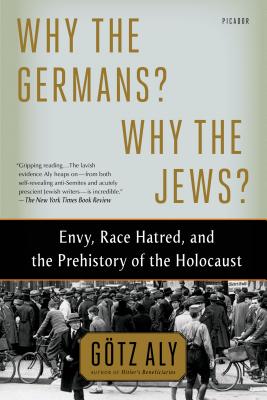 Why the Germans? Why the Jews?: Envy, Race Hatred, and the Prehistory of the Holocaust (Paperback)

Why did the Holocaust happen in Germany, of all places? How did a country known for its culture and refinement turn so rabidly anti-Semitic? Why did a nation where Jews had full civil rights and many opportunities—a place that Jews had eagerly flocked to in the early twentieth century to escape racist persecution in Poland and Russia—turn upon them so violently just a few decades later? Countless people have grappled with these questions, but few have come up with answers as original and perceptive as those of German historian Götz Aly. Tracing the prehistory of the Holocaust—from the 1800s to the Nazis' assumption of power in 1933—Aly shows that German anti-Semitism did not originate with racist ideology or religious animosity, as is often supposed. Instead, through striking statistics and economic analysis, he demonstrates that it was rooted in a more basic emotion: material envy.

Aly's groundbreaking account of this fatal social dynamic opens up a new vantage point on the greatest crime in history and is sure to prompt heated debate for years to come.

Götz Aly is the author of Hitler’s Beneficiaries and Why the Germans? Why the Jews?, among other books. One of the most respected historians of the Third Reich and the Holocaust, he has received the National Jewish Book Award, as well as Germany’s prestigious Heinrich Mann Prize, the Ludwig Börne Prize, and the Geschwister Scholl Prize, among numerous other honors. His books have been translated into 13 languages. He lives in Berlin.

“Consistently absorbing ... a penetrating and provocative study [that] offers shrewd insight into the German mindset over the last two centuries.” —The Jewish Daily Forward

“The most important contribution to the massive literature on the subject. Aly's analysis of a deeply rooted social malady has made the incomprehensible comprehensible.” —Michael Blumenthal, director of the Jewish Museum Berlin