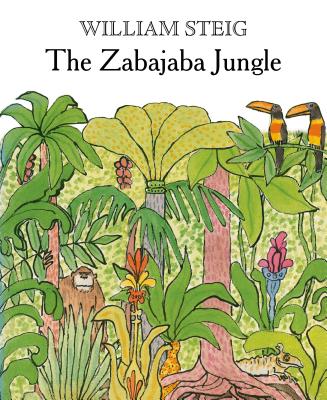 The Zabajaba Jungle is amazing. Its flora and fauna are like nothing ever seen before. Leonard is the first human who has ever entered the jungle, and perils lie in wait behind each bush. But he has a bolo and is brave, and with his cunning and the help of some animal friends, Leonard makes his way through this dreamy land of adventure.

The Zabajaba Jungle is a classic picture book by Shrek creator William Steig.

William Steig (1907-2003) was a cartoonist, illustrator and author of award-winning books for children, including Shrek!, on which the DreamWorks movies are based. Steig was born in New York City. Every member of his family was involved in the arts, and so it was no surprise when he decided to become an artist. He attended City College and the National Academy of Design. In 1930, Steig’s work began appearing in The New Yorker, where his drawings have been a popular fixture ever since. He published his first children's book, Roland the Minstrel Pig, in 1968. In 1970, Steig received the Caldecott Medal for Sylvester and the Magic Pebble. His books for children also include Dominic; The Real Thief; The Amazing Bone, a Caldecott Honor Book; Amos & Boris, a National Book Award finalist; and Abel's Island and Doctor De Soto, both Newbery Honor Books. Steig's books have also received the Christopher Award, the Irma Simonton Black Award, the William Allen White Children's Book Award, and the American Book Award. His European awards include the Premio di Letteratura per l'infanzia (Italy), the Silver Pencil Award (the Netherlands), and the Prix de la Fondation de France. On the basis of his entire body of work, Steig was selected as the 1982 U.S. candidate for the Hans Christian Andersen Medal for Illustration and subsequently as the 1988 U.S. candidate for Writing. Steig also published thirteen collections of drawings for adults, beginning with About People in 1939, and including The Lonely Ones, Male/Female, The Agony in the Kindergarten, and Our Miserable Life. He died in Boston at the age of 95.

“It transcends its adventure-story roots and reveals epic elements. Visually, every page is a feast. The artist's use of saturated color in his powerfully fanciful paintings has never been better.” —Publishers Weekly

“The Zabajaba Jungle is a dangerous place filled with assorted menacing flora and fauna. Leonard, a solid fellow who looks like he might be Brave Irene's older brother, is fighting his way through this jungle for an unknown reason. He walks through the inside of a petrified monster, gets rescued from a mass of snakes by a butterfly, discovers the delicious but illegal nectar of the Jabazaba flower, and is dragged off by mandrills and tossed into a hole in the ground. The mandrills take him before a bizarre triumverate of judges who are impressed when Leonard sets off some fireworks he happens to have. He escapes, and discovers his parents peacefully sitting in an enormous glass bottle, his mother knitting and his father reading the paper. He breaks the bottle and leads them out of the jungle. Steig's illustrations are appropriately jungle-like and colorful, and filled with all kinds of extravagant creations...The narrative has witty moments and a refreshingly challenging vocabulary. Children will resonate to the imaginative aspects of the story, which reflect the irrationality of dreams.” —School Library Journal