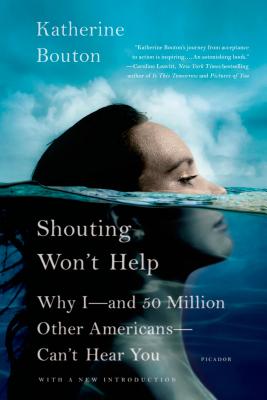 Audiologists agree that we're experiencing a national epidemic of hearing loss. At present, 48 million Americans—17 percent of the population—suffer some degree of loss. More than half are under the age of fifty-five. In cases like Katherine Bouton's, who experienced sudden hearing loss at the age of thirty, the cause is unknown.

In this deftly written and deeply felt look at a widespread and widely misunderstood phenomenon, Bouton recounts her own journey into deafness—and her return to the hearing world through the miracles of technology. She speaks with doctors, audiologists, neurobiologists, and others searching for causes and a cure, as well as those who have experienced hearing loss, weaving their stories with her own. Shouting Won't Help is an engaging and informative account of what it's like to live with an invisible disability—a must-read not only for those with hearing loss, who will recognize their stories in Bouton's own, but for their families, friends, employers, and caregivers.

Katherine Bouton is a former senior editor at The New York Times, where she worked for the magazine, the Book Review, and the daily Books section. Her nonfiction has appeared in The New Yorker, The New York Times Magazine, and many other magazines and reviews. She is currently a regular reviewer and contributor to Science Times. She is the author of the book Shouting Won't Help: Why I--and 50 Million Other Americans--Can't Hear You. She lives in New York City with her husband, Daniel Menaker. They have two grown children.

“Four out of four stars.” —People

“Bouton is one of the millions of people whose hearing began failing when she was much younger, and she masterfully depicts its effects on her personal and professional life....Moving.” —The New York Times Book Review

“Out of [her] upheaval, Bouton reports about the science behind hearing loss and the public-health dangers of an increasingly noisy world, and provides brief biographies of others who have suffered similarly....Essential.” —The New Yorker

“Bouton writes eloquently of a condition that is far more common than we think.” —More

“Katherine Bouton's book is not only entertaining--it is profoundly necessary. As the daughter of a hearing-impaired parent, I found that it offered me insight, inspired compassion, and made me feel less alone.” —Peggy Orenstein, author of Cinderella Ate My Daughter

“Katherine Bouton's journey from acceptance to action is inspiring....An astonishing book.” —Caroline Leavitt, New York Times bestselling author of Is This Tomorrow and Pictures of You

“Read this book, and listen up.” —The Cleveland Plain Dealer

“Shouting Won't Help is a fascinating and frequently moving exploration of the hearing loss that strikes so many of us and those we love. The book is filled with enlightening personal observations, wise advice, and answers to frequently asked questions. If you've ever said ‘What?,' gotten annoyed at those who do, had a miserable experience at an expensive but cacophonous restaurant, or wondered which is most dangerous to your health--sex, drugs, or rock and roll--this book is for you.” —Steven Pinker, Harvard College Professor of Psychology at Harvard University and author of The Language Instinct

“The world is getting noisier, but fortunately we have Katherine Bouton, whose talent for listening remains undiminished by her hearing loss. Her book is both a moving memoir and an indispensable resource for everyone who cares about their ears.” —Deborah Solomon, author of Utopia Parkway

“Katherine Bouton offers a wealth of information and insight about a frustrating and isolating condition. Her book inspires those who suffer from hearing loss and educates those who wish to understand its vicissitudes.” —Jerome Groopman, Recanati Professor of Medicine at Harvard Medical School and staff writer for The New Yorker

“Katherine Bouton makes a brave personal contribution by underscoring the emotional harm deafness can cause. Open, frank, wise, up-to-date, and consistently informative, Shouting Won't Help will be of immense use to anyone dealing with hearing loss.” —Peter D. Kramer, Clinical Professor of Psychiatry and Human Behavior at Brown University and author of Against Depression