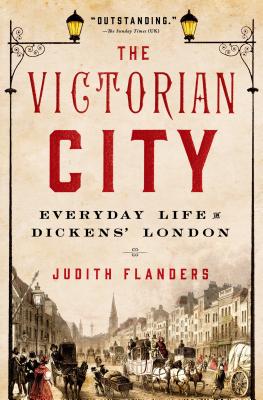 From the New York Times bestselling and critically acclaimed author of The Invention of Murder, an extraordinary, revelatory portrait of everyday life on the streets of Dickens' London.
The nineteenth century was a time of unprecedented change, and nowhere was this more apparent than London. In only a few decades, the capital grew from a compact Regency town into a sprawling metropolis of 6.5 million inhabitants, the largest city the world had ever seen. Technology—railways, street-lighting, and sewers—transformed both the city and the experience of city-living, as London expanded in every direction. Now Judith Flanders, one of Britain's foremost social historians, explores the world portrayed so vividly in Dickens' novels, showing life on the streets of London in colorful, fascinating detail.
From the moment Charles Dickens, the century's best-loved English novelist and London's greatest observer, arrived in the city in 1822, he obsessively walked its streets, recording its pleasures, curiosities and cruelties. Now, with him, Judith Flanders leads us through the markets, transport systems, sewers, rivers, slums, alleys, cemeteries, gin palaces, chop-houses and entertainment emporia of Dickens' London, to reveal the Victorian capital in all its variety, vibrancy, and squalor. From the colorful cries of street-sellers to the uncomfortable reality of travel by omnibus, to the many uses for the body parts of dead horses and the unimaginably grueling working days of hawker children, no detail is too small, or too strange. No one who reads Judith Flanders's meticulously researched, captivatingly written The Victorian City will ever view London in the same light again.

JUDITH FLANDERS is an international bestselling author and one of the foremost social historians of the Victorian era. Her book Inside the Victorian Home was shortlisted for the British Book Awards History Book of the Year. Judith is a frequent contributor to the Daily Telegraph, Guardian, Spectator, and the Times Literary Supplement. She lives in London.

“Judith Flanders's erudite and vivid look at 19th-century London is a reminder that what Charles Dickens --an unflinching observer of urban wretchedness, whom Ms. Flanders rightly hails as 'the greatest recorder the London streets has ever known chronicled in his novels and journalism was merely life as most people then lived it...Ms. Flanders is a beguiling guide, drawing on Dickens's writings to create an irresistible portrait of the English capital at a time of unprecedented expansion... The Victorian City is the perfect companion to Dickens's work.” —The Wall Street Journal

“Flanders uses secondary historical sources alongside Dickens's own impressions of the city to take us on a dazzling journey through an imperial city plagued by poverty and deeply divided by class... Flanders must be given credit for doing an astounding job of recreating every nook and cranny of London in this richly detailed compendium. Shying away from academic pretension, Flanders tells the epic story of this biggest and boldest Victorian city in all its complexity, with verve, color and a straightforward approach to language that still manages to give a voice to ordinary Londoners something Dickens would no doubt approve of.” —NPR.org

“Judith Flanders is giving famed English novelist and historian Peter Ackroyd a run for his money in their joint delight over all things London. In this new work, Victorian expert Flanders fields just about every question the intelligent reader might have about Dickensian London.” —The Buffalo News, 4 out of 4 stars review

“Weaving a tapestry as colorful as a market flower display, Flanders not only describes such things as changes in transportation but takes us right into the streets, to battle the mud and to be smothered in dust. The Victorian City is social history at its finest, a must-read for Dickens fans or anyone who loves London. It reminds us why this time period is endlessly fascinating to read about, but probably not a place we'd really want to live.” —BookPage

“[Flanders'] imagery is often intense and striking... The streets of London were a constant assault on the senses with their noise and smell. This is a superb portrait of an exciting, thriving, and dangerous city.” —Booklist, starred review

“A well-stuffed compendium on the transformational era in the history of London that fed both Charles Dickens' imagination and his well of outrage.... Flanders writes with bubbling enthusiasm about the old markets, Covent Garden and Smithfield, with their accompanying din and smells, and the plethora of life we only know through Dickens' eyes: the street vendors and artists, matchstick sellers, slum dwellers, prostitutes, habitués of gin palaces and prisoners. A terrific companion while reading Boz himself.” —Kirkus

“Flanders (The Invention of Murder) successfully recreates the feel of London at Dickens's peak as she delves deep into the rhythms and architecture of particular neighborhoods.... Flanders's expertise shines when exposing Dickens's embellishments, particularly when his character Fagin faces execution rather than the less powerful but more realistic punishment of deportment. This well-researched sociological overview provides highly detailed context for cultural touchstones, while shattering the popular yet inauthentic image of a pristine Victorian age that never existed.” —Publishers Weekly

“The teeming, bustling, hand-to-mouth and often smelly facts of mid-19th century urban life have seldom been more vividly presented than in this book.” —Literary Review

“With infectious enthusiasm Judith Flanders dives into the sights, smells, sounds and grit of what was then the largest city the world had ever known: London.” —Sunday Telegraph (London)

“Full of detail and colour about everyday life in Dickens's London, and leaves you with a sense not only of how hard life was then, but how strange. Even if you've read Dickens and the contemporary historians of the poor, there is still more to marvel at here.” —Sebastian Faulks, Mail on Sunday Books of the Year (London)

“A quite extraordinary book, which I read with much enjoyment: an intoxicating blend of London, life and literature... I think it's Judith Flanders' best book yet, which is saying something.” —Andrew Taylor

“Meticulous and gripping... Flanders says that Dickens appealed to contemporaries because he gave them a voyage into the unknown: into parts of London they did not know and where they would not venture. She does something similar for us. The strangeness remains, but the voyage is unforgettable.” —Independent (UK)

“Flanders captures the variety and colour of 19th-century London, stirring admiration and indignation by turns. To lead us through the Victorian capital, through its hustle and sprawl, its dangers and entertainments, you couldn't hope for a better guide.” —New Statesman (UK)

“Recreates the textures of everyday life with an anthropologist's understanding of human behaviour alongside a storyteller's eye for character.” —Daily Telegraph (UK)