We Killed: The Rise of Women in American Comedy (Paperback) 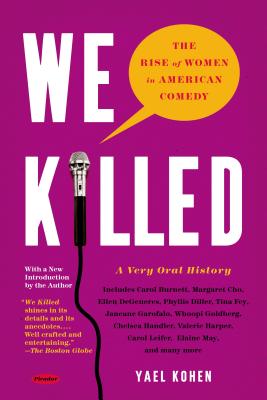 We Killed: The Rise of Women in American Comedy (Paperback)

"We Killed shines in its details and its anecdotes....Well crafted and entertaining."—The Boston Globe

From live comedy to television and bestseller lists, women rule the comedy industry—and, as this fascinating oral history shows, they have fought long and hard to make their way to the top. In We Killed, Yael Kohen assembles America's most prominent comediennes—along with the writers, producers, and nightclub owners in their orbit—to piece together the rise of women in American comedy. Beginning with the emergence of Phyllis Diller and Joan Rivers in the fifties, and moving forward to the edgy intelligence of Elaine May and Lily Tomlin on to the tough-ass stand-ups who would take SNL by storm, Kohen chronicles the false starts, backslides, and triumphs of female comedians. With a chorus of more than one hundred creative voices, We Killed takes us backstage to tell the story of the revolution that brought us Tina Fey, Sarah Silverman, and Chelsea Handler—and a world where women can be smart, attractive, sexually confident, and flat-out funny.

Yael Kohen is a reporter and editor in New York City. A contributing editor at Marie Claire, she covers books, pop culture, and issues important to working women. She has written for New York magazine, Salon, The Daily Beast, the New York Daily News, and The New York Sun.

“We Killed shines in its details and its anecdotes....Well crafted and entertaining.” —The Boston Globe

“An anecdotal history of the women who crack us up and push boundaries [told] by the trailblazers themselves....You'll learn as much as you laugh.” —Cameron Diaz

“A comprehensive oral history...Part show business chronicle and part unabashed (read: drugs, digs, and dirt) confessional, We Killed [is] further proof that women, and the men who heed their talent, will have the last laugh.” —Elle

“Comics of all levels of celebrity and vintage, as well as club owners, producers, writers, agents, and network executives, carry the story...[and] there's a bracing dose of shoptalk that puts you right inside their wheelhouse....Satisfying.” —The New York Times Book Review

“A remarkable history of women in comedy.” —The Observer (London)