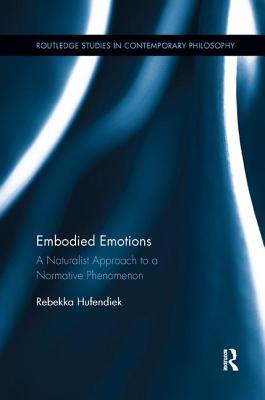 In this book, Rebekka Hufendiek explores emotions as embodied, action-oriented representations, providing a non-cognitivist theory of emotions that accounts for their normative dimensions. Embodied Emotions focuses not only on the bodily reactions involved in emotions, but also on the environment within which emotions are embedded and on the social character of this environment, its ontological constitution, and the way it scaffolds both the development of particular emotion types and the unfolding of individual emotional episodes. In addition, it provides a critical review and appraisal of current empirical studies, mainly in psychophysiology and developmental psychology, which are relevant to discussions about whether emotions are embodied as well as socially embedded. The theory that Hufendiek puts forward denies the distinction between basic and higher cognitive emotions: all emotions are embodied, action-oriented representations. This approach can account for the complex normative structure of emotions, and shares the advantages of cognitivist accounts of emotions without sharing their problems. Embodied Emotions makes an original contribution to ongoing debates on the normative aspects of emotions and will be of interest to philosophers working on emotions, embodied cognition and situated cognition, as well as neuroscientists or psychologists who study emotions and are interested in placing their own work within a broader theoretical framework.

Rebekka Hufendiek is a postdoctoral candidate at the University of Basel. Her research focuses on philosophy of mind and psychology with a particular intereest in embodied cognition, emotion theories and naturalism. She has written several papers and reviews on embodiment, emotions, the modularity of mind and the vices and virtues of naturalist approaches to the mind.