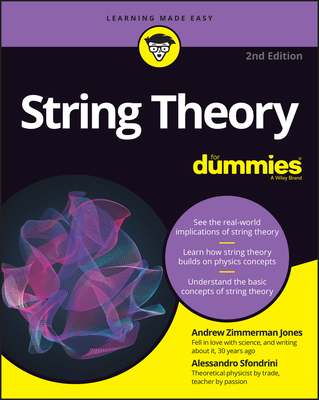 Unravel the secrets of the universe and untangle cutting-edge physics

Yes, you actually can understand quantum physics String Theory For Dummies is a beginner's guide, and we make it fun to find out about the all the recent trends and theories in physics, including the basics of string theory, with friendly explanations. Build a foundation of physics knowledge, understand the various string theories and the math behind them, and hear what the opponents to string theory have to say. It's an exciting time to be alive in advanced physics, and this updated edition covers what's new in the string world--the Large Hadron Collider, the Higgs Boson, gravitational waves, and lots of other big headlines. Unleash your inner armchair physicist with String Theory For Dummies.

Aspiring scientists or life-long learners will both be able to gain valuable information from this book. This accessible intro into string theory is for the theorists inside anyone.

Andrew Zimmerman Jones, PhD, is the physics guide at About.com, where he writes lessons and explanations for common physics problems and questions. Andrew earned his degree in physics from Wabash College and his PhD in mathematics from Purdue University. He is the author of the previous edition of String Theory For Dummies. Alessandro Sfondrini is a theoretical physicist. He obtained his bachelor's and master's degrees in physics from the University of Padova. He is currently a Rita Levi-Montalcini Fellow and assistant professor in theoretical physics and mathematical methods and models at the University of Padova, as well as a member and IBM Einstein Fellow at the Institute for Advanced Study in Princeton, New Jersey.