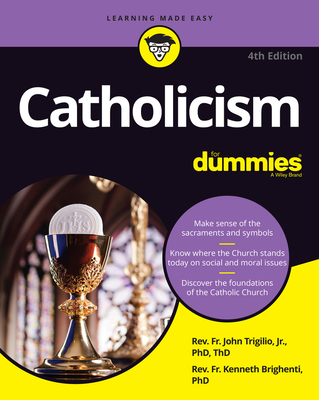 Catholicism can seem a bit mysterious to non-Catholics--and even Catholics. Embrace your curiosity and turn to Dummies for answers Full of fascinating facts and written in a friendly style, Catholicism For Dummies explains the basics of Catholic beliefs like the importance of Sunday Mass; the seven sacraments; the purity of the Blessed Virgin Mary; heaven, hell, and purgatory; the Trinity; and so much more. You'll learn about the Catholic perspective on women as priests, saints as examples of how to live, and prayer as the basis of a relationship with God.

This easy-to-read resource offers an overview of a rich and diverse faith. You'll also discover:

Whether you're a cradle Catholic or just curious about the world's second largest religion, Catholicism For Dummies has the answers you're seeking to a faith that's been around for thousands of years. Order your copy today.

Rev. Fr. John Trigilio, Jr., PhD, ThD, is President of the Confraternity of Catholic Clergy and a member of the faculty at Mount St. Mary's Seminary in Emmitsburg, Maryland. Rev. Fr. Kenneth Brighenti, PhD, is co-host with Father Trigilio of a weekly television program on EWTN called Web of Faith. With Father Trigilio, he is the co-author of previous editions of Catholicism For Dummies.