The Economist's View of the World: And the Quest for Well-Being (Hardcover) 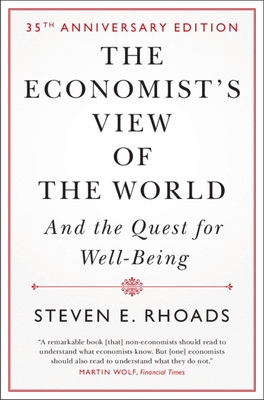 The Economist's View of the World: And the Quest for Well-Being (Hardcover)


On Our Shelves Now at:
Released in 1984, Steven E. Rhoads' classic was considered by many to be among the best introductions to the economic way of thinking and its applications. This anniversary edition has been updated to account for political and economic developments - from the greater interest in redistributing income and the ascendancy of behaviorism to the Trump presidency. Rhoads explores opportunity cost, marginalism, and economic incentives and explains why mainstream economists - even those well to the left - still value free markets. He critiques economics for its unbalanced emphasis on narrow self-interest as controlling motive and route to happiness, highlighting philosophers and positive psychologists' findings that happiness is far more dependent on friends and family than on income or wealth. This thought-provoking tour of the economist's mind is a must read for our times, providing a clear, lively, non-technical insight into how economists think and why they shouldn't be ignored.