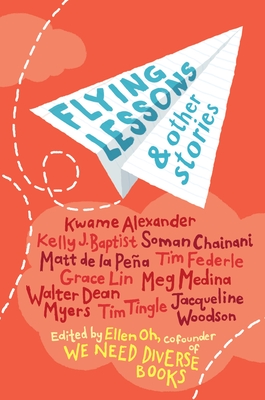 
Not On Our Shelves—Ships in 1-5 Days
Whether it is basketball dreams, family fiascos, first crushes, or new neighborhoods, this bold short story collection—written by some of the best children’s authors including Kwame Alexander, Meg Medina, Jacqueline Woodson, and many more and published in partnership with We Need Diverse Books—celebrates the uniqueness and universality in all of us.

"Will resonate with any kid who's ever felt different—which is to say, every kid." —Time

Great stories take flight in this adventurous middle-grade anthology crafted by ten of the most recognizable and diverse authors writing today. Newbery Medalist Kwame Alexander delivers a story in-verse about a boy who just might have magical powers; National Book Award winner Jacqueline Woodson spins a tale of friendship against all odds; and Meg Medina uses wet paint to color in one girl’s world with a short story that inspired her Newbery award-winner Merci Suárez Changes Gear. Plus, seven more bold voices that bring this collection to new heights with tales that challenge, inspire, and celebrate the unique talents within us all.

“There’s plenty of magic in this collection to go around.” —Booklist, Starred

“Thought provoking and wide-ranging . . . should not be missed.”—Publishers Weekly, Starred

“Read more books by these authors.” —The Bulletin, Starred
Ellen Oh is cofounder and president of We Need Diverse Books (WNDB) and author of the YA fantasy trilogy the Prophecy series and the middle-grade novel The Spirit Hunters, to be published in fall 2017. She was named one of Publishers Weekly’s Notable People of 2014. Ellen met Walter Dean Myers and his son Christopher Myers at one of her first book festivals. Already nervous, her mouth dropped open when she saw the pair towering over the crowd. Chris took pity on an awestruck Ellen and introduced himself, and he and Walter couldn’t have been nicer, taking her under their wing and treating her like an old friend. Oh resides in Bethesda, Maryland, with her husband and three children. Discover more at ellenoh.com.
“There’s plenty of magic in this collection to go around.” —Booklist, Starred

“Inclusive, authentic, and eminently readable, this collection of short stories is an excellent addition for libraries and classrooms.” —School Library Journal, Starred

“Thought provoking and wide-ranging, this first anthology from WNDB should not be missed.”
—Publishers Weekly, Starred

“Whether or not middle-schoolers read the afterword . . . they are sure to agree that they need to read more books by these authors, whose storytelling styles and genuine feel for adolescent struggles and triumphs will inspire them to seek out their other work.” —The Bulletin, Starred