The Outlandish Companion (Revised and Updated): Companion to Outlander, Dragonfly in Amber, Voyager, and Drums of Autumn (Hardcover) 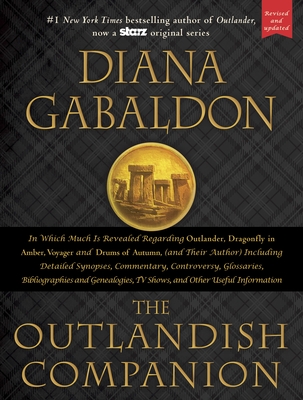 The Outlandish Companion (Revised and Updated): Companion to Outlander, Dragonfly in Amber, Voyager, and Drums of Autumn (Hardcover)

#1 New York Times bestselling author Diana Gabaldon has captivated millions of readers with her critically acclaimed Outlander novels, the inspiration for the Starz original series. From the moment Claire Randall stepped through a standing stone circle and was thrown back in time to the year 1743—and into a world that threatens life, limb, loyalty, heart, soul, and everything else Claire has—readers have been hungry to know everything about this world and its inhabitants, particularly a Scottish soldier named Jamie Fraser.

In this beautifully illustrated compendium of all things Outlandish, Gabaldon covers the first four novels of the main series, including:

• full synopses of Outlander, Dragonfly in Amber, Voyager, and Drums of Autumn
• a complete listing of the characters (fictional and historical) in the first four novels in the series, as well as family trees and genealogical notes
• a comprehensive glossary and pronunciation guide to Gaelic terms and usage
• The Gabaldon Theory of Time Travel, explained
• frequently asked questions to the author and her (sometimes surprising) answers
• an annotated bibliography
• essays about medicine and magic in the eighteenth century, researching historical fiction, creating characters, and more
• professionally cast horoscopes for Jamie and Claire
• the making of the TV series: how we got there from here, and what happened next (including “My Brief Career as a TV Actor”)
• behind-the-scenes photos from the Outlander TV series set

For anyone who wants to spend more time with the Outlander characters and the world they inhabit, Diana Gabaldon here opens a door through the standing stones and offers a guided tour of what lies within.
Diana Gabaldon is the #1 New York Times bestselling author of the wildly popular Outlander novels—Outlander, Dragonfly in Amber, Voyager, Drums of Autumn, The Fiery Cross, A Breath of Snow and Ashes (for which she won a Quill Award and the Corine International Book Prize), An Echo in the Bone, and Written in My Own Heart’s Blood—as well as the related Lord John Grey books Lord John and the Private Matter, Lord John and the Brotherhood of the Blade, Lord John and the Hand of Devils, and The Scottish Prisoner; one work of nonfiction, The Outlandish Companion; and the Outlander graphic novel The Exile. She lives in Scottsdale, Arizona, with her husband.