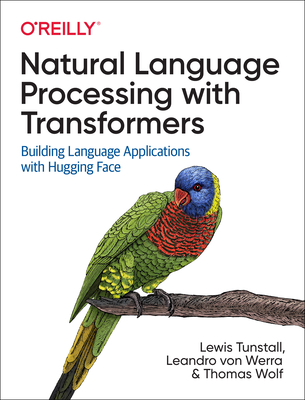 Since their introduction in 2017, transformers have quickly become the dominant architecture for achieving state-of-the-art results on a variety of natural language processing tasks. If you're a data scientist or coder, this practical book shows you how to train and scale these large models using Hugging Face Transformers, a Python-based deep learning library.

Transformers have been used to write realistic news stories, improve Google Search queries, and even create chatbots that tell corny jokes. In this guide, authors Lewis Tunstall, Leandro von Werra, and Thomas Wolf, among the creators of Hugging Face Transformers, use a hands-on approach to teach you how transformers work and how to integrate them in your applications. You'll quickly learn a variety of tasks they can help you solve.

Lewis Tunstall is a machine learning engineer at Hugging Face. He has built machine learning applications for startups and enterprises in the domains of NLP, topological data analysis, and time series. Lewis has a PhD in theoretical physics and has held research positions in Australia, the USA, and Switzerland. His current work focuses on developing tools for the NLP community and teaching people to use them effectively.Leandro von Werra is a machine learning engineer in the open source team at Hugging Face. He has several years of industry experience bringing NLP projects to production by working across the whole machine learning stack, and is the creator of a popular Python library called TRL, which combines transformers with reinforcement learning.Thomas Wolf is chief science officer at and cofounder of Hugging Face. His team is on a mission to catalyze and democratize NLP research. Prior to cofounding Hugging Face, Thomas earned a PhD in physics and later a law degree. He has worked as a physics researcher and a European patent attorney.