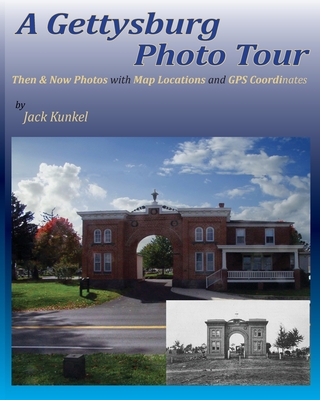 Come back in time with me as we tour the exact locations on the Gettysburg battlefield where events happened - both momentous and mundane - during the battle that changed American history. We know for sure exactly where certain events happened because we can match the modern-day locations to where the old, period photographs were taken.

The Gettysburg battlefield was unique in the Civil War in that it was both heavily photographed and well preserved, allowing us to follow in the exact footsteps of the original photographers who took photos that they considered the most worthy at that time. Though no photos were taken while the battle was in progress, a large number were taken just a few days later - while Lee's army was still retreating back to Virginia, and before mothers learned their boys lay dead at a place called Gettysburg.

All of the best of the period photos known taken of Gettysburg in the days or month after the battle are included in this book, most with easily followed map locations of where they were taken, and even GPS coordinates. Where no immediate photos were taken of an interesting subject, I've included the earliest photo available, sometimes one or two decades after the battle.

Most of the maps in the book are tied to Google online maps, and/or to maps on the website CivilWarBattles.us, so you can simply click or type the book's map links on your computer or smart phone to find the exact photo locations.

In all, you'll find over 100 then & now Gettysburg photos in this book, as well as numerous landscape photos showing modern views of the battlefield. Whether you tour the battlefield from your easy chair, or actually walking the field, I hope and believe you'll find this book to be an invaluable companion.